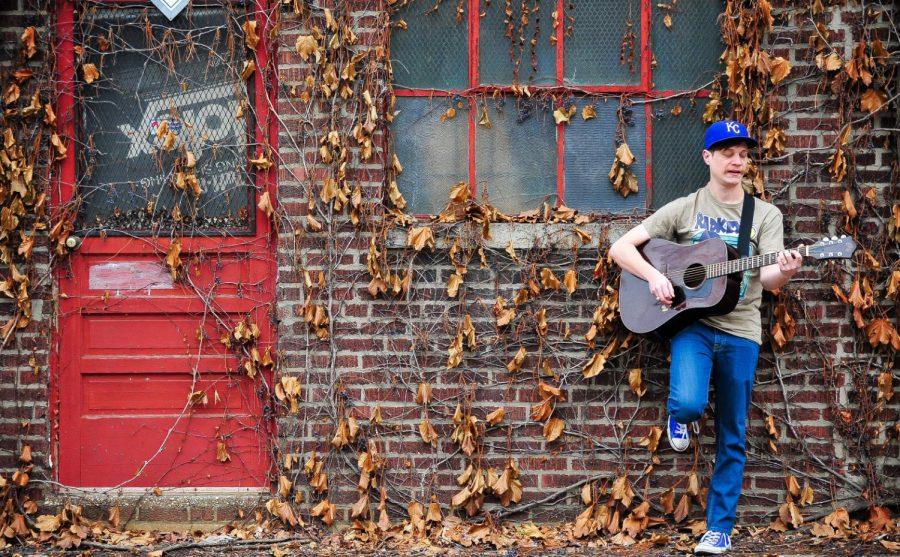 Singing is Believing: Singer-songwriter Max Fred self-released his debut EP, "MaxwelLP" in January of this year and has made it available for purchase at www.MaxFredMusic.com. Catch Max live in Topeka on Feb. 21 at The Boobie Trap and March 6 at J&J's Gallery Bar in NOTO.

Topeka native and 2009 Washburn graduate Max Fred has emerged onto the local music scene with his soulful and rootsy debut EP, “MaxwelLP.” Blending elements of folk, bluegrass, country, pop and rock, the singer-songwriter defines his sound as alt-folk, but insists there is much more behind his music than the description suggests.

“It’s hard to identify yourself as a solo musician. And when people think of a folk musician, they think of Joan Baez or someone like that,” Fred said. “I think my music is an alternative to that. I don’t think there is anything on the radio right now that fits with what I’m doing.”

While at Washburn, Fred cut his teeth in local jam-bands Shunganunga and Wakamojo. In 2011, Fred relocated to Kansas City to further his professional career, but never abandoned his passion for performing. It wasn’t long after the move that he launched his career as a solo artist.

“It wasn’t something I really planned, but when I moved to Kansas City, it was harder to get people to come out and jam,” Fred said of his transition from playing in bands to taking matters into his own hands. “I had a bluegrass band going. When that broke up, I was frustrated because I had really made progress with that band. I wanted to start something that I could keep building. Going solo was the easiest way to do that.”

A lifelong musician and performer, stepping away from the comforts of backing musicians and into his own spotlight came easy to Fred. Open mic nights and coffee shop sessions soon culminated into the first official Max Fred gig, which took place in 2011 at Topeka’s popular live music venue The Boobie Trap. While gigs were few and far between at first, within a year, Fred started playing regularly around the area, even making the occasional trip to the Lake of the Ozarks to perform out of his local comfort zone.

As his sound progressed and name began to spread, Fred took the next logical step and started work on his debut recording. Staying true to the organic nature of his music, Fred wanted to release an album that remained faithful to what his growing fan base had become accustomed to hearing.

“The album I have out right now is just me and my guitar. I recorded it all in one take. I didn’t do individual tracks, studio tricks or overdubs,” Fred said. “It suffers in certain spots, regarding the balance of guitar and vocals, but that’s what my music sounds like if you saw me in a bar.”

Recorded in his living room with the help of Stonecraft Audio’s Chris Stone, “MaxwelLP” features five songs of stripped down and tuneful personal expression that delivers an undeniable sense of honesty.

“I want my music to be accessible and that comes from writing about a real experience I’ve had or the way I feel about a situation in my life. I think a lot of people probably feel the same way. In our society, a lot of people feel marginalized. Look at fast food, which is some of the fakest food there is, but they all want to tell you it’s the ‘realest food’ out there. I don’t think my music is the realest out there, but it’s definitely not fake.”