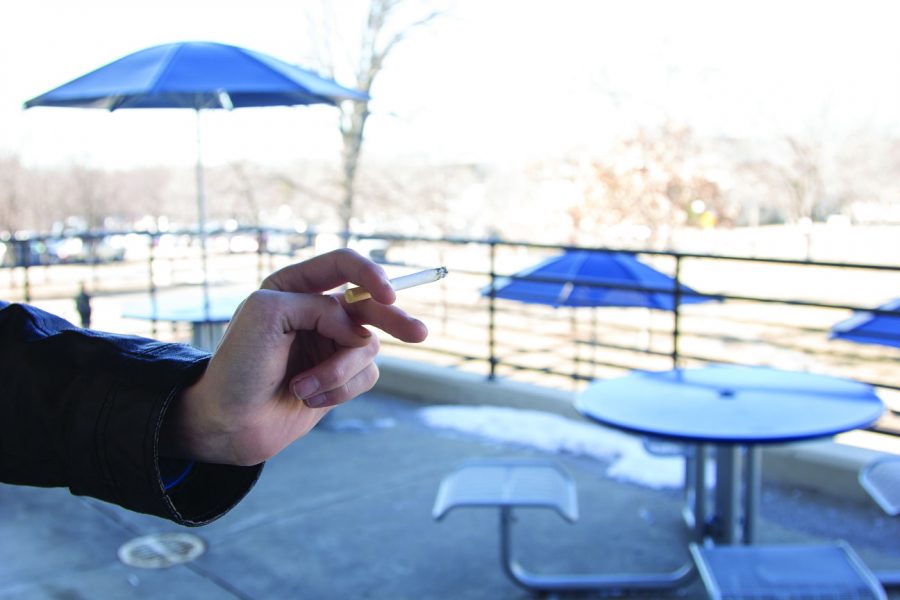 A resolution to pursue a smoke free campus was passed on Feb. 18, 2015 by the Washburn Student Government Association.

At the full senate meeting, senate resolution SR 14-15 #002 passed 13-9 with two abstaining. It was a non-binding statement of commitment by the senate to pursue talking to school administrators about converting Washburn to a smoke free campus.

“We’ve come together. We’ve talked about it. We know what is going on. We’re deciding to go in this direction,” said Cassandra White, president of the WSGA.

The plan discussed at the Feb. 18 meeting would have Washburn smoke free by the fall 2015 semester. Consequences for smoking on campus during the initial semester would only be a warning. Starting Jan. 1, 2016, the warnings would become tickets.

Initially the White/McAfee administration looked to persuade Washburn administrators to build smoking installations, but they were told that would not happen because of cost and liability.

After an unofficial survey was conducted by WSGA, it was found that 68 percent of Washburn students wanted the campus to be smoke free and 62 percent of people have been bothered by smoke on campus.

White said the survey was given by WSGA senators in their classes, at the library, residence halls and student organizations. She said that about 10 percent of the student body was questioned.

White said she can’t say if there were any biases in the survey. She said if there were, results would have matched the senate vote, which they did not.

White said that as of Oct. 1, 2014 there were 1,478 campuses in the United States that are smoke free. Of those, 976 are tobacco free and 292 prohibit e-cigarettes anywhere on campus.

“I do think that smoke free is something real and actual and should be done,” White said.

White said the main concern are people smoking near intake vents and doorways. People have complained about smoke in areas around Morgan Hall, the tables around the Memorial Union and people walking on campus sidewalks. She said its hard to enforce the rule that smoking can not occur within 10 feet of doors and air vents, especially when its cold or wet outside; people want to be warm.

“We are worried about infringing upon what [people who smoke] view is their right,” White said. “We should also be worried about the 62 percent, and their ability to function on campus.”

“If [smoking] is part of your lifestyle,” White said, “then you can craft your schedule around it.”

White said that Washburn buildings are pretty much on the periphery of campus, and even if you are at the center of campus, its not more than an eight minute walk anywhere.

White said that we are past the point where society is asking if smoking or secondhand smoke is bad.

“It’s kind of a no brainer at this point,” White said.

“Now the question is, ‘where do we keep it’?” White said. “If its a personal choice, but has public ramifications where is it appropriate to do so?

“I think we’ve reached our verdict and that is we should be smoke free,” White said.