The Book Owl: The DUFF 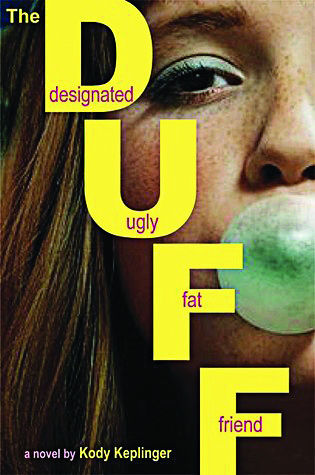 The Book Owl: The DUFF

Originally, I was gearing up for a predictable opposites attract romantic comedy, but The DUFF proved me wrong. Bianca is a snarky high school senior blissfully unaware of her low social ranking despite her group of top-of-the-food-chain friends. When Wesley, local obnoxious heartthrob, clues her in that she is regarded at school as her friends’ DUFF (Designated Ugly Fat Friend), her confidence takes a nose dive as she reconciles the confirmation of her worst insecurities and her home life becoming increasingly unbearable in the wake of her parents’ divorce. Surprisingly, she turns to Wesley as a distraction from her problems and the two establish a long-standing series of weekend flings.

Bianca and Wesley’s unorthodox relationship revealed a surprising amount of depth in both of them as we peeled back their layers. Bianca is an incredibly cynical, quick-witted girl who swears like a sailor and I loved her. Her no nonsense attitude was balanced out nicely with a level of emotional maturity and charming vulnerability that made it all too easy to sympathize with her even at her worst. It bugged me how nutty her logic was at times, and it was clear that this novel was written by a teenager. An extremely talented teenager (I could never have written something half as good at seventeen), but that did not excuse the occasionally overly sappy scenes or annoying dialogue. The DUFF never hesitated to call itself out, though, when it crossed those lines, so it was a self-aware novel at least.

The narrative was straightforward without a lot of fluff and gave me plenty to think about, touching upon physical insecurities, absent parents, alcoholism and no-strings-attached sex. None of Bianca’s revelations were exactly life-changing, like with other coming of age stories, but they effectively struck a chord in me. Interestingly enough, the main cast were still at their core the same people they were as when the story started, I just held a clearer understanding and a lot more affection for them after all was said and done. They all grew as people, sure, but they never lost their initial essence, and I appreciated that.

Overall, The DUFF was a self-deprecating dramedy rife with interesting characters and themes bound to resonate with teens and adults alike. Its only real flaw was that the writing could have been more polished and included less melodrama.