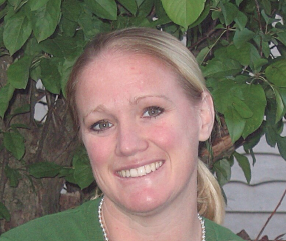 Casey Woodward graduated from Washburn University in 2004 with a Criminal Justice degree. For 15 years she worked with and taught juvenile delinquents, then decided to go back to school for her secondary history teaching license.

“What makes me happy is working with kids,” Woodward said. “I’ve always had a passion for teaching and am interested in Kansas history.”

Her research project, “No One Listened,” was one of few chosen for Undergraduate Research Day at the Capitol 2015. It digs deep into Kansas history and tells a tale of many Native American children forced to be assimilated into white culture by attending boarding school.

The four main points she brings to light are, health and nutrition, environment, everyday regimen, and basic education. Woodward did most of her research at the Cultural Center in Haskell Indian Nations University, which she found out used to be a boarding school itself. In addition, she researched at the State Archives in Kansas City. Both locations yielded an abundance of information, including microfilm, adding to the depth of her project.

“The more I dove into it the more I realized I had no idea and the more complex the children appeared,” Woodward said.

There were so many stories Woodward said she wanted to tell and so many voices wanting to be heard. One girl in particular that she really connected with was Bright Eyes, who in 1879 wrote to the newspapers about the wrongs that were being done. Like so many others, hers was a tale of injustice.

Woodward poured through stacks of letters and petitions sent by parents and children fighting the policies put in place to force the Native American children to be put in boarding schools.

“To be clear,” Woodward said. “Some were upset and others weren’t. Sometimes their home lives were bad so they were happy to go to the boarding school.”

For the most part though, she found that families and children were being torn apart and stripped of their native culture. Woodward learned a lot about the struggle they went through, and she found more of a passion for Native American studies. Growing up in the Rural Valley area as a child, Woodward remembered learning very little about the history of Kansas and the Native American children, something she doesn’t want to continue to happen.

“I grew up with Pottawatomi kids, but knew so little of their history or culture,” said Woodward.

Woodward’s mentor, Kerry Wynn, sparked a flame that inspired her to learn and write about the Native Americans and Kansas history in her research project “No One Listened.”

“Talking with her helped me find that passion,” said Woodward. “To recognize how important Kansas history is and to pay attention to how much children affect society.”

Woodward added that children need to know what they are being provided with educationally and to have a passion for learning. There is a lack of information and curriculum being taught in elementary, and secondary schools about Native Americans.

Kansas is rich with their history and culture, yet it is rarely found in school books. Woodward wants her research project to be a voice to parents and children, urging them to look at what is really being taught in the schools. “We need to pay attention to how much children affect society,” said Woodward