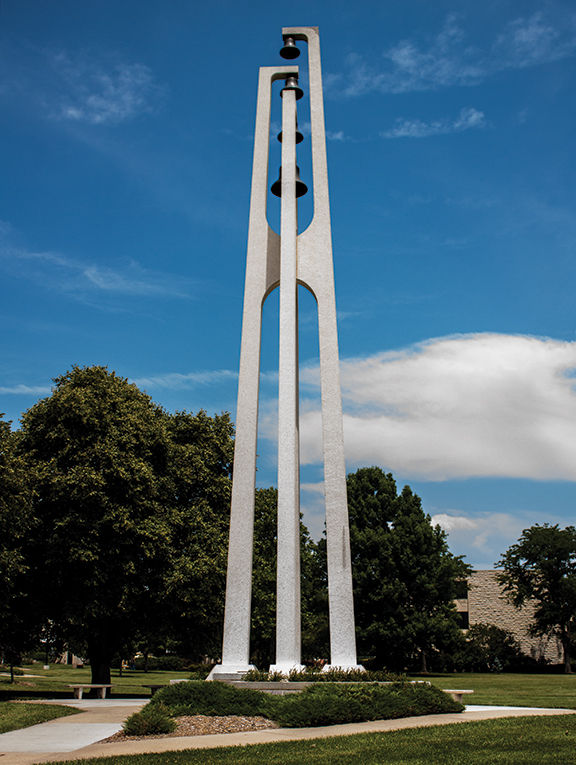 150 Years and Counting: The Kuehne Bell Tower, named for donors Fred and Julia Kuehne, was dedicated in 1971 and features a set of bells that hung in the Thomas Gymnasium clock tower, which was destroyed in the tornado of 1966. Since its construction, the bell tower has become a symbol of Ichabod pride.

Washburn University will celebrate its sesquicentennial on Friday, Feb. 6, 2015. In anticipation of the 150th anniversary, celebrations were split into four years starting with the academic year beginning in August 2011. Each academic year focused on one of the four eras in Washburn’s history. This year focuses on the last 25 years and looks toward the future.

The Lincoln Harmon Lecture will be the first of many sesquicentennial events over the next nine months. The lecture is one of many special events instituted for the anniversary. This year, the speaker will be Steven Hahn, professor of history at the University of Pennsylvania. His lecture is titled “What the Slaves Thought of Lincoln” and will be held on Feb. 5 at 7 p.m. in the Washburn Room of the Memorial Union.

Other upcoming events include a student concert in April called “WU Stock” and a Grand Graduation on May 16, but the big events will be held in Oct. 2015 during Homecoming weekend. On that weekend, the Morgan Hall Welcome Center and Sesquicentennial Ichabod Plaza will have its grand opening followed by the Homecoming football game against the University of Central Oklahoma.

Martha Imparato, who started working at the library 25 years ago, is director of special collections at the Mabee Library. She is in charge of university archives and has been helping to collect relevant history relating to Washburn’s past and bring it to the present.

“It’s very exciting to be around for that milestone in the university,” Imparato said of the sesquicentennial.

Some of the most exciting things she said she’s witnessed at Washburn have been when Jerry Farley, the university president, arrived as well as seeing new building construction and campus beautification efforts.

Imparato’s mission is to categorize all the university publications that she can, including the yearbook, alumni magazines, newsletters and more. Some of the oldest things the university has include the original Lincoln College records.

Washburn was founded in 1865 as Lincoln College by a charter issued by the state of Kansas and the General Association of Congregational Ministers and Churches of Kansas. In 1868, the school was renamed Washburn College after Ichabod Washburn pledged $25,000 to the school.

Since there were hardly any high schools in Kansas at the time and high school was a college requirement, the first year of Lincoln College only served as a high school. The following year, a couple of students transferred into the college from the high school. Only one person, Addison Pease Davis, graduated from Lincoln College before the university was renamed to Washburn. He was a prisoner of war in the south before the Civil War ended. In the fall of 1866, he transferred in as a junior, and graduated in 1868.

“We’ve been non-traditional from the very beginning,” Imparato said of Davis being a transfer student.

Imparato said that Washburn has been a forward thinking school from its start. The Articles of Association in the Incorporation of Lincoln College reads, “To afford to all classes, without distinction of color, the advantages of a liberal education, thus fitting them for positions of responsibility and usefulness.”

She also said that the very first class at Lincoln, the high school, had an African-American male, but his name isn’t known.

Amanda Hughes, assistant director of University Relations graduated from Washburn in 2000 and started working for the University in 2004. She is also a co-chair of the sesquicentennial committee.

Hughes said that for the last 15 or so years the campus has been transformed due to Farley’s vision for the campus. Both Hughes and Imparato have noticed the trend of students wearing Washburn gear more often than in the past, and that there is a lot more school pride.

“Students out on the lawn throwing frisbees,” said Hughes, “that’s something I wouldn’t have seen when I was a student.”