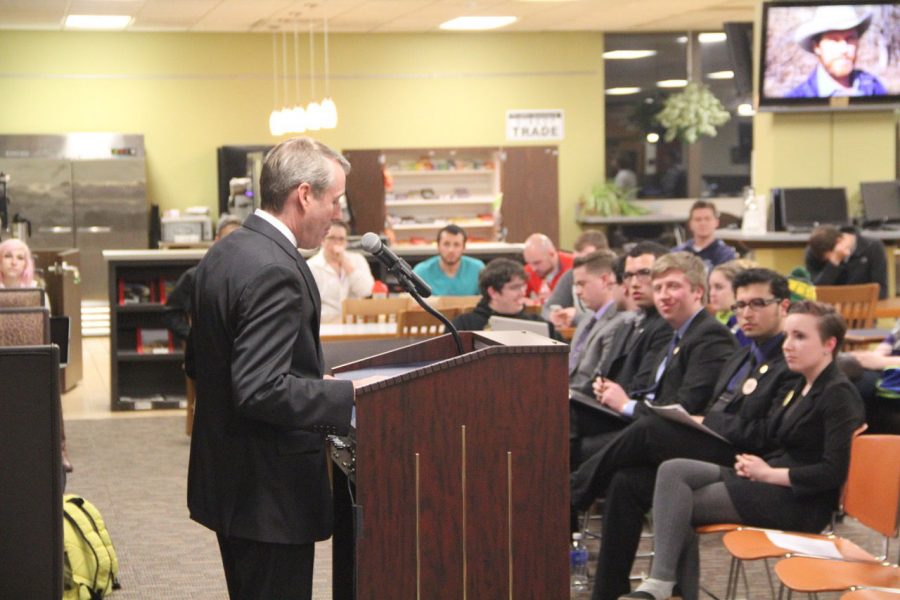 The candidates for WSGA Presidency participated in a debate on Thursday, March 5.

The teams of Damian Barron and Brooke Peele, Blake Porter and Malcolm Mikkelsen, and John Shively and Evan Altman were asked multiple questions by host and Assistant Dean of Mabee Library Sean Bird that spanned various subjects regarding the candidates’ individual ideas on what would be best for the future of the campus.

All of the candidates expressed excitement while waiting for the debate to start.

“I’m a little nervous, naturally, but I’m just really excited to let the students know what our platform is, answer any questions they might have and hopefully have a spirited discussion tonight,” said presidential candidate Blake Porter.

“We’ve been working really hard on this, both of us, and we really do care about Washburn,” said presidential candidate Damian Barron.

“When we saw people get as excited about the things we’re talking about on campus as we were, it increased our excitement, and now we’re really passionate because now we really want to bring that positive change to campus and we think this is a good step towards doing so,” said vice presidential candidate Brooke Peele.

Candidates were given three minutes to respond to each question asked. They covered multiple subjects, including current campus issues, such as the need for more parking and the need for new measures against sexual assault.

“We want to foster a culture of consent here on campus, where we educate people what consent is, where we educate people about the misconceptions that exist in rape culture today,” Peele said. “When asking students if they were to be victimized what they would do, if they knew where to go, the overwhelming response was “no.” That shows an inherent problem on our campus. We want to have a sexual assault response team. This is a group of faculty who have undergone advocacy training, so when this happens they know where to go.”

John Shively also proposed a repeal of the tobacco smoking ban on campus.

“What it does is it tries to solve a problem, an addiction, by forcing everyone off of campus,” Shively said. “Prohibition doesn’t work; if we want to help people, then let’s do it in a real meaningful way.”

Shively also proposed the idea of a student-run Supreme Court to assist in regulating WSGA.

“Currently, there is no oversight; there is no accountability on behalf of the students and the student organizations that pay for WSGA to do what it does,” Shively said.

Porter’s agenda was described as a plan to Regroup, Recharge, and Reinvest.

“The regroup aspect gets away from just whatever administration is in power, their policies get pushed through,” Porter said. “I think it could be focused more on the students and their concerns. To recharge we think that has to do with Washburn pride. There’s a lot we can do to make the Ichabod a more visible figure on campus. To reinvest, we want to make sure that student organizations as well as those who aren’t in student organizations can request funding if they would like it.”

Interesting to note is that the candidates agreed on multiple issues, but differed in methodology.

“I don’t know if I’m going to win, but hearing what all the other candidates are doing, and knowing that they’re doing good for Washburn regardless makes me feel confident that we are moving forward,” Barron said.

The candidates all also expressed hopes to compromise and work together for the benefit of Washburn, regardless of the race results.

“I would hope that we would reach out to the other candidates about maybe chairing ad hoc committees that help create change. Even if you run and lose, you should still have an effective way to have your voice heard on campus,” Shively said.

“Whether we win or lose, I think Washburn is about to take some major steps forward just because of what we talked about tonight,” Peele said.