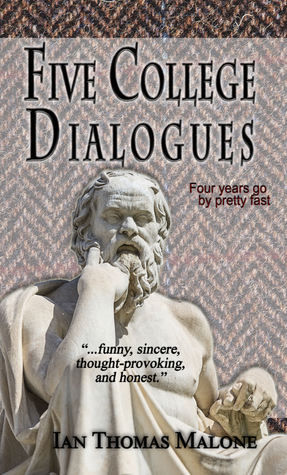 Five College Dialogues is a set of -you guessed it- five dialogues about college life. The story’s main character is George “The Chief” Tecce, a young graduate student working as a teacher’s assistant in the English department. The story follows his various interactions with students and faculty as they all deal with all too real dilemmas like the logistics of getting into upperclassmen parties, striking a balance between overachieving and failing, hook-up culture and the inevitability of life after school is finally over.

George was hilarious and took no flack from anyone. He called people out on their crap and could take it when they did it right back.  I liked that he wasn’t an infallible figure doling out pristine advise, that he was only this wise because he had already made plenty of mistakes as a freshman, too. This was a thoughtful set of philosophical discussions about college life packed with the tongue in cheek witty writing style I’m always game for. It’s definitely something any current or incoming college students would get a kick out of (and could benefit from). The book probably isn’t something a lot of students would pick up willingly, but this is one of the few times I’ll say I would recommend this. It could be great assigned reading for college students. I think everyone could get something out of it, no matter how close they are to graduation.

However, the book reads pretty awkwardly at times and had a somewhat stilted writing style. I can accept that it was purposefully set up like a dialogue between Socrates and one of his students would have been, a traditional format for philosophical readings. It’s a hard sell, though, to convince me anyone actually talks like this, especially college freshmen, and that aspect kept me partly removed for the entire read. Also, while the content itself was genuinely funny and thought-provoking, the novel never seemed quite sure which it wanted to predominantly commit to from scene to scene, and was very problematic. It was an unbalanced satire of sorts with high highs and low lows.

This wasn’t a bad read at all, a lot of love and effort clearly went into writing it. This book had a lot of sound, down to earth advice that I know I could get some mileage out of. It could benefit from some fine-tuning in terms of flow and aesthetic distance. I suggest running it through an editor without any sort of philosophical background so it reads better for the general masses.