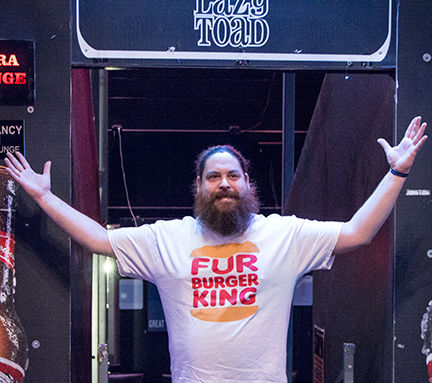 Local comedian Austin Evan Wright, along with nationally-renowned comic/actor/writer Brandt Tobler, will appear this Wednesday, March 25 at the Lazy Toad in Fairlawn Plaza. Washburn students and faculty can mention this article and get $2 off the cover charge.

If laughter is truly the best medicine, then Austin Evan Wright is a pharmacist.

A Topeka native, Wright has made a name for himself as one of the area’s most popular and active comedians. Wright kicked-off his comedy career with pair of appearances at the now-closed Topeka eatery and nightclub The Vintage.

“I went up with my guitar and did these goofy songs that I wrote,” Wright said. “Looking back, it had to be the worst thing ever because there was really no comedy involved. The songs were funny, but I never really said anything. I just hid behind my guitar.”

Motivated by those initial outings, Wright threw caution to the wind and made the journey to Nashville, Tenn., to audition for NBC’s Last Coming Standing.

“I got there, stood in line at 2 a.m. and waited until 8 a.m. before I finally got up there. I made it past the first three rounds and the rest is history.”

The Last Comic Standing auditions gave Wright the opportunity to perform in front of actors George Wendt and John Ratzenberger, better known as drinking buddies Norm and Cliff from the ‘80s sitcom Cheers. The pair was impressed enough with Wright’s material that, despite having already selected their 10 finalists, moved him forward in the competition, where he reached the third round before NBC executives decided he was too racy for primetime.

“I didn’t really have any stand up material at all, just these funny songs,” Wright said. “You have to do something new every round, so when I got to the third round I had to dig into some of my dirtier songs. They told me, ‘That was really funny, but it will never make it onto national television. Thank you for your time and have a safe trip back to Topeka.’”

Despite not making the final cut, the trip to Nashville was anything but a waste of the comedian’s time. Not only was Wright’s set featured on an episode on Last Comic Standing, NBC included him in one the show’s commercials as well. Ironically enough, his local fans were unable to catch his national television debut thanks to, of all things, the weather.

“When I got home, I reserved the loft at Boss Hawg’s BBQ and invited around 80 people for a viewing party,” Wright said. “The night my episode aired, there was a tornado in the area. It wasn’t even in Topeka, just on the outskirts. The weatherman from KSNT, who loved being on camera, spent like 20 minutes on the air talking about it and completely wiped my segment out!”

From there, Wright began fine-tuning his set and focused less on comedic songs and more on traditional stand-up comedy. He was eventually offered a regular emcee gig for a weekly comedy competition in Kansas City, which helped him master the art of writing stand-up material. The gig also provided numerous networking opportunities, as well as a chance to put Topeka on the national comedy map.

“I met guys like AJ Finney, Mike Baldwin and a lot of great comedians who are doing huge things right now,” Wright said. “Those guys offered to come do shows if I wanted to start booking them. I started setting up shows in little bars in and around Topeka and Lawrence. Now I’ve got guys from LA and New York who have made Topeka a stop when they’re touring across the country.”

Wright’s network of comedian friends eventually led to an introduction to actor/comedian Will C, an award-winning comic who has performed across North America and appeared in a number of films, including Yes Man and Seven Pounds. After the two hit it off, Will C, a former soldier with U.S. Marine Corp and Army, offered Wright, who served in the Air Force, a spot on the upcoming Veterans of Comedy Tour. With six dates confirmed and more to be added, the Veterans of Comedy Tour will act as a platform to raise awareness and money for veterans struggling with mental health issues and suicide. The tour will also be made into a Netflix comedy special later this year.

“We’re losing around 50 troops a day to suicide, so they’re focusing on that” Wright said. “The Wounded Warriors project is involved. I feel really blessed to be a part of this. I’ve wanted to perform for the troops for a long time now. Of the six cities confirmed, I’m guaranteed Kansas City. I’ll get paid more money than I’ve ever had in my bank account for 45 minutes of my time and more for any other cities I do. I don’t even do this for the money, so I’m really blessed to have this fall in my lap.”

Charity gigs are nothing new for Wright, who has held fundraising shows for the family of slain Topeka police office Cpl. Jason Harwood and the Adopt A Family for Christmas charity.

“I’m not that funny, I shouldn’t be making money doing this,” Wright joked. “I feel like it’s always good to give something back to someone that needs it more than I do. I enjoy helping people out, that’s my main focus. I love making people smile and laugh.”

Wright will once again fill a room full of laughter when he appears at Topeka nightclub The Lazy Toad in Fairlawn Plaza this Wednesday, March 25, with writer/comedian/actor Brandt Tobler, who is coming through town on his 60-city “Bad Decisions Make the Best Stories” tour.

The show starts at 8 p.m. and is open to anyone 18 and over. Tickets are $7 at the door. Washburn students and faculty can mention this article and receive $2 off the cover charge with valid Washburn ID.

Check out video clips of Austin Evan Wright at www.youtube.com/user/ADUB33TTOWN.