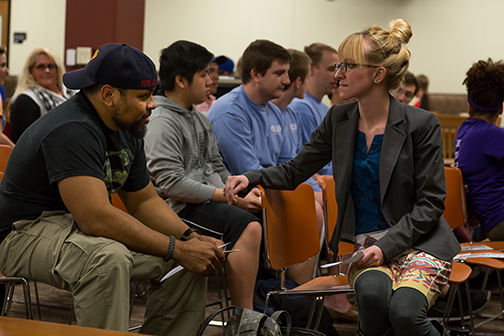 Washburn psychology professor Jericho Hockett speaks with students at last week's rally against sexual assault in Mabee Library. Hockett appeared at the rally to discuss the effects of sexual assault.

Katie Wade is a sophomore history and mass media major.

Washburn students, faculty, staff and community members gathered in Mabee Library on Thursday, March 12, for a rally against sexual assault.

The event was sponsored by campus organizations S.T.A.N.D. and To Write Love on Her Arms and featured guest speakers discussing the effects of sexual assault and resources available in the greater community of Topeka.

Jericho Hockett, professor of psychology at Washburn University, spoke at the event about the short and long term physical and psychological effects of sexual assault. Hockett also shared statistics regarding both women and men at risk of being assaulted.

“One in four women is likely to be raped in her lifetime,” Hockett said. “And while the literature on the rape of men is more sparse, we do have estimates suggesting that around one in 16 to one in six men will also be raped in his lifetime.”

Hockett noted that it is easy for individuals to distance themselves from statistics such as these. Then she applied those numbers to Washburn’s student population.

“This means that of the 3,957 female students enrolled at Washburn in fall 2014, around 1,000 of them are at risk of being raped in their lifetimes. Of the 2,765 male students on Washburn’s campus last fall semester this means that anywhere from 180 to 460 of them are likely to be sexually assaulted in their lifetime,” Hockett said. “So while it is likely that you know someone who has been raped or sexually assaulted, it’s also possible that you know somebody who has done that assaulting.”

The discussion then turned to how individuals can change their perceptions of sexual assault and what they can do to create a healthier and safer community, which Hockett said begins with each individual recognizing and confronting their own hypocrisy in their attitudes and beliefs.

“Some of the negative consequences of rape are associated with the way that other people respond to the person who has been assaulted. These responses include things like disbelief, doubt, blame and marginalization of the experience, which can be so disempowering, so damaging, that we actually refer to these responses in the literature as ‘second rape,’” Hockett said. “In other words, while most people don’t perpetrate sexual assaults, many of us may be guilty of perpetuating a social climate in which the rape perpetrator may justify and get away with their assaults.”

According to Hockett, this is why the United States is often acknowledged as having a ‘rape culture.’

“That is, a culture in which rape is perpetrated, justified, and excused,” Hockett said.

Audra Fullerton, public education coordinator at the Topeka Young Women’s Christian Association, then spoke about resources that are available through the greater community of Topeka for those who have questions, are seeking assistance or want to get involved in the cause.

She also talked about the importance of healthy, open and ongoing conversations that result in better educated individuals having healthy and safe interactions.

“If we are not honest with ourselves about what we think about relationships and how we approach sex, and get uncomfortable so that we can be more comfortable talking about sex, then we are only going to have unhealthy sexual encounters,” Fullerton said.

Students who attended the rally responded well to the discussion, participating in a quick Q&A following the presentation.

“It was a cool kind of eye-opening experience. I learned a lot,” said senior Dyllan Calderwood.

Kyle Blocker, sophomore finance major, knows the importance of having these types of discussions on college campuses.

“I’d say it’s like the first and foremost issue that higher education is facing right now, so the fact that we’re doing something like this at Washburn is of the utmost importance,” Blocker said.

April is sexual assault awareness month and according to Christian Sauerman, junior fine arts major, plans are in the works for more events like this on Washburn’s campus in the near future, including a March Against Sexual Assault on Thursday, March 26. Also, on Thursday, April 2, Washburn will host YouTube blogger Laci Green to talk about rape culture in our society.