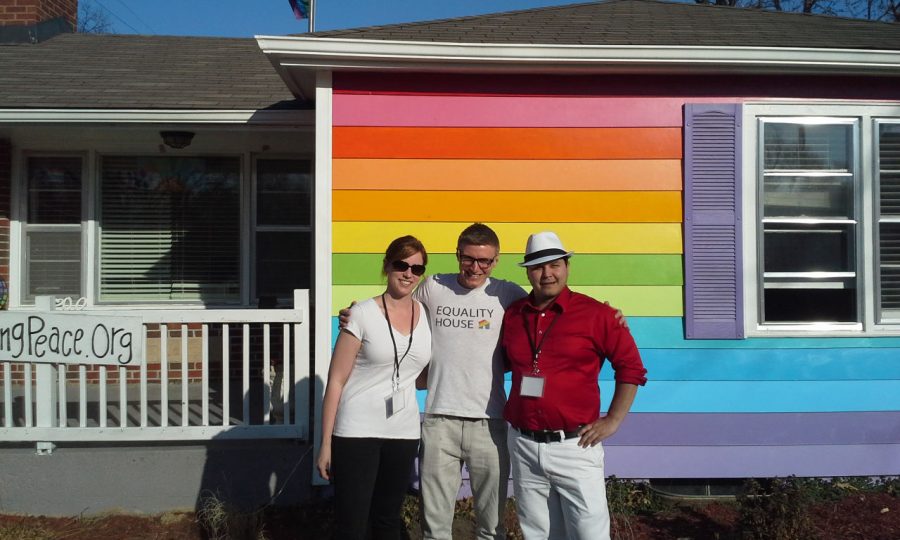 Director of Operations Davis Hammet (Middle) stands with two NOH8 volunteers in front of Equality House, as locals have their photos taken inside.

Planting Peace’s Topeka Equality House hosted an open photo shoot by the NOH8 campaign for locals to participate in on March 10.

The NOH8 Campaign announced last month that it would be having a photo shoot as a fundraiser for the organization, which would allow them to continue their work in promoting marriage, gender and human equality through a variety of mediums.

The event ran from 4-7 p.m., with more than 1,000 Topekans signed on to participate on the event’s Facebook page. A steady stream of people could be seen coming and going from the Equality House throughout the day. Here, volunteers assisted participants in applying duct tape and NOH8 temporary tattoos before meeting with professional photographer Adam Bouska to have pictures taken.

Mya Gahlen, a participant in the photo shoot, said she was happy to be a part of the event to support local equality.

“You realize that you’re not just doing it for others, you’re really doing it for the people that you know and love,” Gahlen said.

Nick Boos, another participant in the shoot, talked about how pleasant visiting Equality House was.

“It was really nice, I’ve lived here in Topeka for awhile and I just love that this is here. It just felt like there was so much love back there waiting for your picture,” Boos said.

Equality House, located across the street from the Westboro Baptist Church, was founded by Aaron Jackson in March of 2013. The house has since been a symbol of peace, compassion and positive change. People from across the country have visited the house, which hosts multiple campaigns alongside NOH8.

Davis Hammet, the Director of Operations for Equality House, readily welcomed back the NOH8 campaign, which also did a tour in 2014.

“The NOH8 campaign is awesome. They actually came here last year to do their first photo shoot, and now they came back again because last year was so great,” Hammet said.

Hammet also expressed satisfaction with how the event and its results turned out.

“The idea behind this is to raise visibility, so you get people that have beautiful, well-done photos of them saying NOH8, and saying they will work towards peace, and the visibility aspect really fits in with us, because that’s our goal too,” Hammet said.

“The visibility of this issue gets people to start having conversations about this, and what we’ve tended to find is that whenever people talk about civil rights and social issues, they usually inch closer to the right conclusion, that we all are equal and should all be treated with respect.”

In light of Gov. Brownback’s new bill to rescind a state protection policy for LGBT workers against discrimination, Hammet believes NOH8’s photo shoot promoting equality could not have been better timed.

“Out of nowhere the governor rescinds protections for this group of state employees… Now, that has no benefit to the state for doing that. It’s actually a danger to the state; they’re at a higher risk for lawsuits,” Hammet said. “We’ve also done projects in Uganda, which is incredibly homophobic. Their government was actually trying to make homosexuality punishable by death. You have a leader of a country who will have massive economic policy failures, and then what they do is blame a minority group for the problem. To be in a country like Uganda that’s experiencing that is one thing, but then to come back to the United States of America, now in 2015, and I have the governor of Kansas doing the same thing? It’s very unsettling.”

The following day after the Topeka photo shoot, a photo shoot was also held in Kansas City, MO. NOH8 is continuing to tour across the United States to offer open photo shoots in multiple locations, to further spread their message of equality.