Yes means yes, no means no – the march to end rape culture 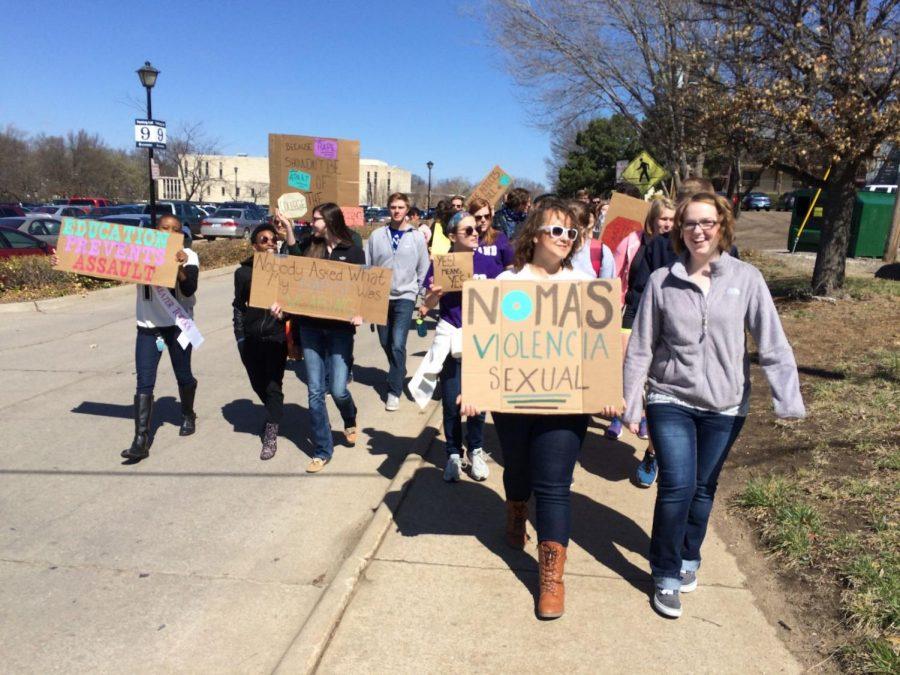 During the March to End Rape Culture, students pass through Lot 9 carrying decorated cardboard signs. The intention of the march was to raise awareness about rape culture in the United States.

Washburn students and community members marched and chanted around campus on March 26to display their want to end rape culture.

“As we marched, we chanted ‘yes means yes, no means no, whatever we wear, wherever we go’,” said Misha Reed, a sophomore exercise physiology major and the current Miss Greater Topeka. “That particular chant was easy for the group to learn and it plainly states that regardless of the setting or what someone is wearing, consent is the only thing that matters. During my year of service, I want to do as much as I can to raise awareness about rape culture and consent and this was a great opportunity to do so.”

The march was put together by members of Washburn’s Students Together Advocating Non-Violence in Dating, student organization, which tries to eliminate dating violence through awareness and education. STAND has previously helped organize events for rape survivors, such as the vigil to honor victims of sexual abuse at Carole Chapel.

“Sexual assault is too common and it affects everyone, which is why it is important for students to participate in these events,” said Megan Smith, a junior political science major and vice president of STAND.  “The more people that get involved and speak up, the closer we get to creating social change and having a safer community.”

Reed took to Facebook and Twitter to let people know about the march. Reed also says there will be similar events in the near future because she wants people to know that sexual assault is a serious issue.

“It was inspiring to see a large group of people united to end sexual violence,” said Smith. “What was especially encouraging was that an almost equal number of men and women participated in the march.”

Smith says that students can help end rape culture by getting involved with STAND. The group meets every Tuesday at 4 p.m. in the Memorial Union, Lincoln room.