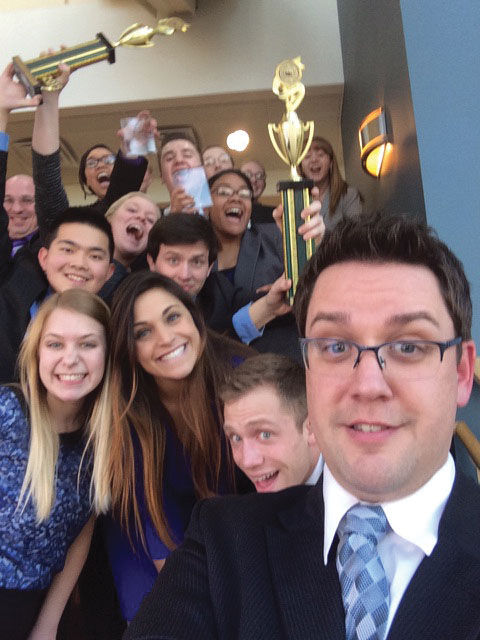 The Washburn mock trial team had a long season this year, making it to what were essentially the national semifinals.

The journey began in August when the American Mock Trial Association distributed the case that all mock trial teams would be arguing over the course of the season. More than 200 universities compete in mock trial.

Washburn took part in three tournaments in the 2014 fall semester.

“The first semester of every year is usually working out the kinks of the case,” said senior Devon Tarantino, treasurer of Washburn’s mock trial team. “AMTA’s also going to release some case changes to make some minor corrections to smooth the case out evenly [and] make sure both sides are weighted evenly.”

“There was not an A team or a B team, a varsity or JV team,” she said.

Tarantino said the teams begin preparing for regionals in November and continue through January. During this time, the team fine tunes its strategies and solidifies who will be playing which role during the tournament.

“Basically, second semester is when you start to hammer down,” Tarantino said. “That’s when, you know, teams are in preparation mode because regionals is right around the corner. So regionals happens – it starts in February. It could be any weekend in February. Washburn hosts it every single year the third week in February.”

This year, Washburn saw great success at regionals, with team 1118 pulling off an 8-0 sweep over schools such as Kansas State, Creighton and Air Force.

Both Washburn teams earned a bid to go to the Opening Round Championship Series, which was held March 13 through 15 at Hamline University in Anoka, Minnesota. There, Washburn met up with Creighton again, but the tournament also included schools such as Gonzaga University, Drake University and Florida State University.

The Ichabods were less fortunate in the ORCS with both teams unable to earn a berth to nationals.

“It didn’t go as well as we had hoped,” Tarantino said about the ORCS. “Yeah, it was disappointing. However, for the seniors, it won’t be the last time they’re in a courtroom, most likely, and for the juniors and sophomores and freshmen we have on the team, they will be able to compete again next year and hopefully get to nationals.”

Tarantino said mock trial is something that all aspiring attorneys or0 anyone who wants to be an advocate should be a part of.

“Anyone who wants to do trial advocacy and be in a courtroom and wants to advocate for clients, and has a passion to advocate, then they should definitely do it, because it gives you great first-hand experience like no other,” she said.