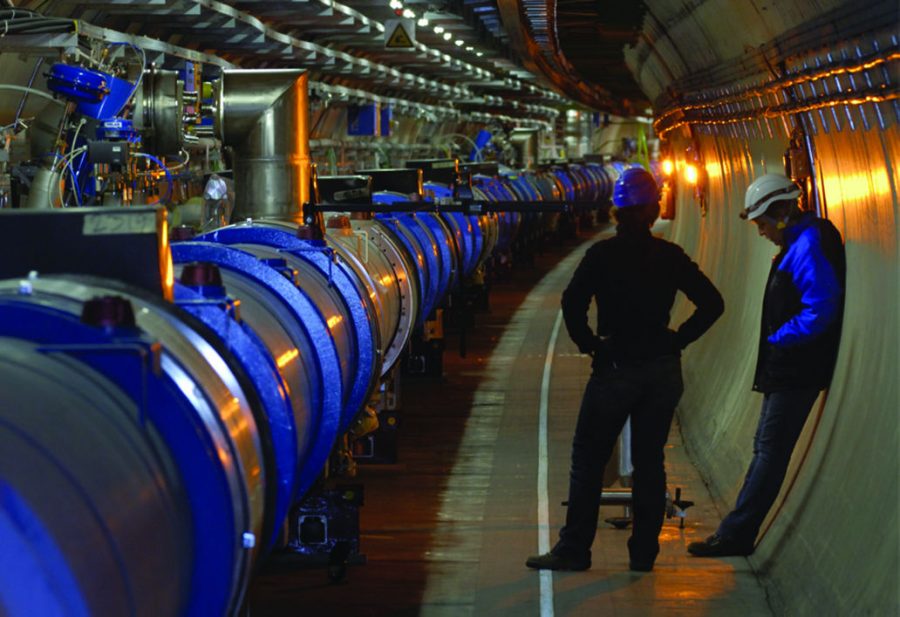 After undergoing upgrades over the last two years, the world’s biggest and most powerful physics experiment, the Large Hadron Collider, was powered back up on April 5, 2015.

The LHC is a particle collider, and is the single largest machine in the world. It took ten years to build and went online for the first time in 2008. During its first “season” it discovered the elusive Higgs boson, a particle that makes up the Higgs field. The presence of the field explains why some fundamental particles have mass. In 2013, it was shut down to undergo upgrades.

On April 5 at 10:41 a.m. local time in Geneva, Switzerland, the LHC fired a proton particle in its 17 mile circumference magnetic ring followed by a second particle in the opposite direction at 12:27 p.m.

According to a press release by the European Organization for Nuclear Research, also known as CERN, the particles were circulated at an injection energy of 450 billion electronvolts, and over the coming days, operators will check all systems before increasing the energy of the particles.

An electronvolt is the amount of energy gained by a single unbound proton or electron when it is accelerated through an electric or magnetic field. For comparison, a AA battery gives an electron about 1.5 electronvolts of energy. The full power of the upgraded LHC has an energy of 13 trillion electronvolts.

The LHC works by cooling superconducting magnets to the extreme temperature of negative 455 degrees Fahrenheit. These magnets propel particles in opposite directions in tubes at an ultrahigh vacuum at speeds approaching the speed of light.

Gigantic particle detectors placed at four interaction points along the ring record the collisions when the particles collide.

In routine operations, protons can lap the 17 mile long ring over 11,000 times per second, producing up to a billion collisions per second. Computers at CERN store over 30 petabytes of data from LHC experiments every year. That is equivalent of 1.2 million Blu-ray discs.

With the LHC entering its second season of operation, experiments will be exploring uncharted territory. According to the CERN press release, upcoming experiments will seek new particles beyond well-established physics theories, antimatter, dark energy and dark matter. Only about 4 percent of the universe is made of matter we can detect directly. About 23 percent is made of dark matter, and 73 percent is made of dark energy.