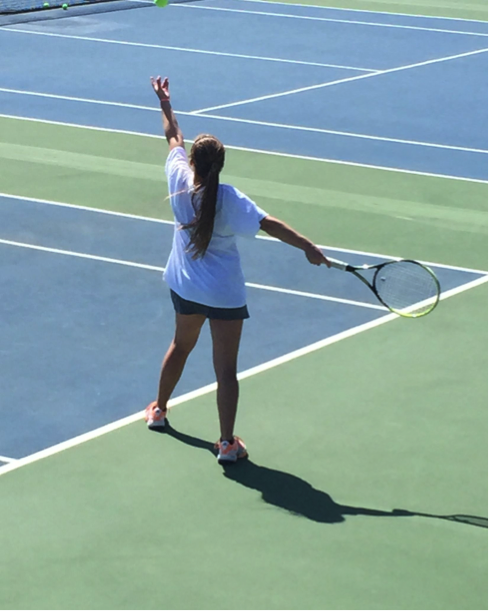 After a long, two week break from action, the Washburn Ichabods’ women tennis team (1-6, 1-1 MIAA), was presented a golden opportunity to improve their overall record as well as their MIAA standings this past week while they played host to Missouri Western Griffons (6-3, 2-2 MIAA) and Concordia University Bulldogs at WU Tennis Complex in Topeka, Kansas.

The energy at the WU Tennis Complex was positive and electrifying to see the women’s’ tennis team back in action as, “Lets Go Bods” cries echoed from the crowd onto the court, signaling the start of the second half of the season and Casyn Buchman’s last half of her storied Washburn athletic career began.  Although the atmosphere was optimistic, the realistic possibility of a slow start for the (1-6, 1-1 MIAA) Washburn Inchabods was unavoidable against the Griffons of Missouri Western who came into the game (6-3, 2-2 MIAA).

The Inchabods quickly found themselves down 2-1 at the end of the doubles matches as many of the players seemed sluggish from the break as many points the Griffons earned was from unforced errors.  Washburn’s lone doubles win came from the duo of junior, Jodie Blackim and freshman, Maggie Plum, who although let their emotions get the best of them at times battled tough to a 8-2 win.  The singles competition was not a victorious affair either for Washburn as five o the six matches ended in loses including, two sport star athlete Casyn Buchman, who competed furiously but lost in 3 sets.  The lone victory from the singles competition came from Gwen Shepler 6-4, 6-4.  With the loss Washburn fell to (1-7, 1-2 MIAA) which was a major blow in the conference standing as the Inchabods fell 3 spots from 3rd to 6th.

Day 2 of Washburn’s back to back against Concordia University Bulldogs was a landslide victory for the Ichabods as they looked much more sharp than the previous day.  All 9 matches resulted in wins for the Inchabods as the team only lost 14 games in both singles and doubles combined.  The turnaround started with the dominating play from doubles duo Casyn Buchman and Jodie Blackim who overpowered their opponents from Nebraska with numerous net slams including one that left the complex.  Matching the senior’s effort was freshman Maggie Plum who capped a long traveled, high energy, volley with a furious net slam that got the crowd at WU Tennis Complex on their feet as the duo including Gwen Shepler cruised to an 8-1 victory.  The leadership of senior Casyn Buchman was much needed, junior Nzingha Banks stated on Buchman’s leadership skills, “I believe you have to credit Casyn’s calm emotions while the younger players at times seems to unravel. “  Casyn’s calm, competitive fury was displayed in her singles match.  After the senior was swept on point for her only loss, Buchman overmatched her opponent and bullied her way past the last two point, finishing the game with a beautiful ace for the win.

Unfortunately Concordia is not a MIAA rival so Washburn’s standing in the conference did not change, however the Inchabods (2-7, 1-2 MIAA) are now building momentum and will continue to lean their star senior and young team to sustain their recent success and work to a positive 2015 season.