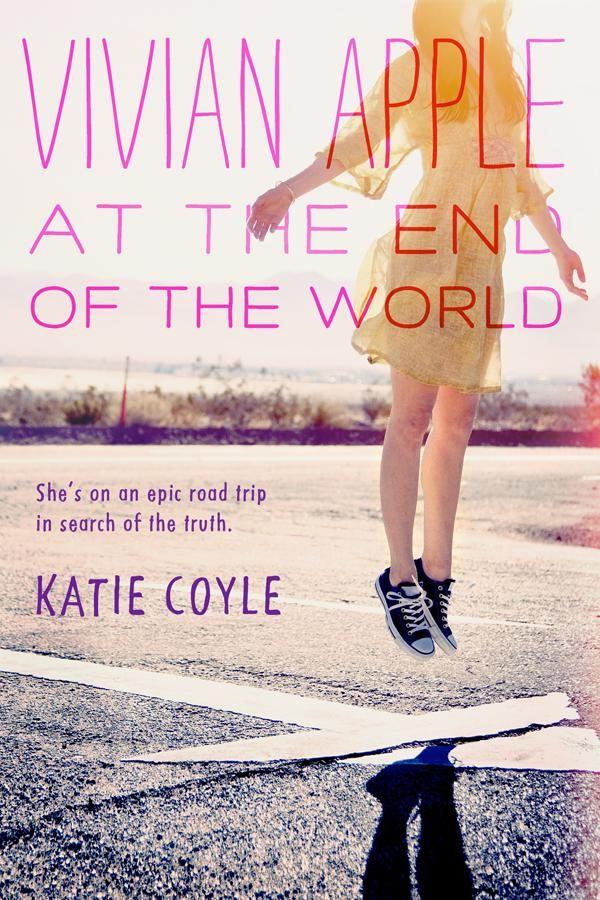 In ‘Vivian Apple At the End of the World,’ seventeen-year-old Vivian and her parents belong to an evangelical cult known as the Church of America, a group led by the fanatical Beaton Frick. The church believes that the Rapture is coming which will send all true believers to heaven, leaving everyone left behind on Earth for six months until the subsequent end of the world.

As the countdown to the Rapture draws closer and mass hysteria arises, over 75 percent of the country – the President included – joins the cult and begins following Frick’s preaching.

The story opens at the final moments before the Rapture where Vivian and her non-believer friends are having a mock end of the world party. When she returns home, she finds her parents missing and two holes in the ceiling. Not accepting that they and many others were really Raptured, Vivian and two of her friends embark on a road trip to track down the truth of the matter.

The author, Katie Coyle, obviously had a lot of fun with this story. She marries the dystopian and contemporary road trip premises in an interesting, exciting way I haven’t seen done before. These two setups are used so frequently in literature today, though, that at times it feels vaguely familiar and trope-ish, but the story itself still strikes this nice balance between adventure and comedy as the group investigates the mystery behind Frick.

At first blush, I thought this novel would be an attack on modern organized religion, but it more or less leaves that topic well alone and zeroes in on cults, mob mentality and capitalism for its criticism. It offered up a lot of interesting commentary on how terrifying Frick’s authority over both church and state is and all the ways a society can fall apart because of that.

And yes, it wouldn’t be a road trip story if there weren’t a romance. I really enjoyed both of these characters and I wanted them to end up together, but the romance happened a smidge too quickly for my liking. It was sweet and all, but the payoff would have been better if the relationship had been more drawn out in its development. However, that was the only aspect I wanted to take its time.

Even though the story dragged some for a portion in the middle of the novel, it was wonderfully fast paced as a whole and kept me guessing and completely invested in Vivian and company’s journey. That did take some doing for me initially, though – caring about Vivian and her friends. They needed to grow on me for the first hundred pages before I was anything but neutral about them, but when they came into their own as the story picked up, I had zero trouble connecting with them and I didn’t want our time on the road trip to end.

My two largest issues were how long it took for me to feel for Vivian and how quickly we’re thrown into her romance. We’re left with quite a few questions by the end of the novel, though to be fair, it was purposefully written that way to setup its upcoming sequel ‘Vivian Apple Needs a Miracle,’ coming out this September.

Overall, the plot was exciting, the mystery was well thought out and the ambiguous ending was surprisingly satisfying. I can’t wait to finish this series and see where Coyle and Vivian take me next!