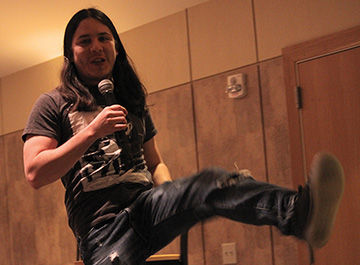 Comedian Nick Guerra entertained Washburn students with his relatable humor and charm on April 7 in the Washburn room.

Guerra made a point to connect with the students who attended the show. He began his act by relating to all the short people in the audience, talking about the troubles of high cabinets and the struggles of dealing with tall toilets.

“I loved when he used people in the audience in his act,” said Hillary Ronnebaum, an undeclared freshman. “His laugh was so unique and it made everyone laugh. I thought it was really funny.”

Guerra also frequently asked the audience about their own lives, their relationships, and their inner evil tendencies. Guerra says we all secretly have evil tendencies, such as stealing shopping carts and eating donuts before having to pay for them.

Guerra even got himself laughing when talking about the adventures of a girlfriend moving into his home. Guerra says the move starts with a simple toothbrush, then the bobbi pins appear and it all goes down hill from there.

“I really enjoyed [the show],” said Coral Steinhoff, a freshman physical therapy major.  “It was the best laugh I’ve had in a really long time.”