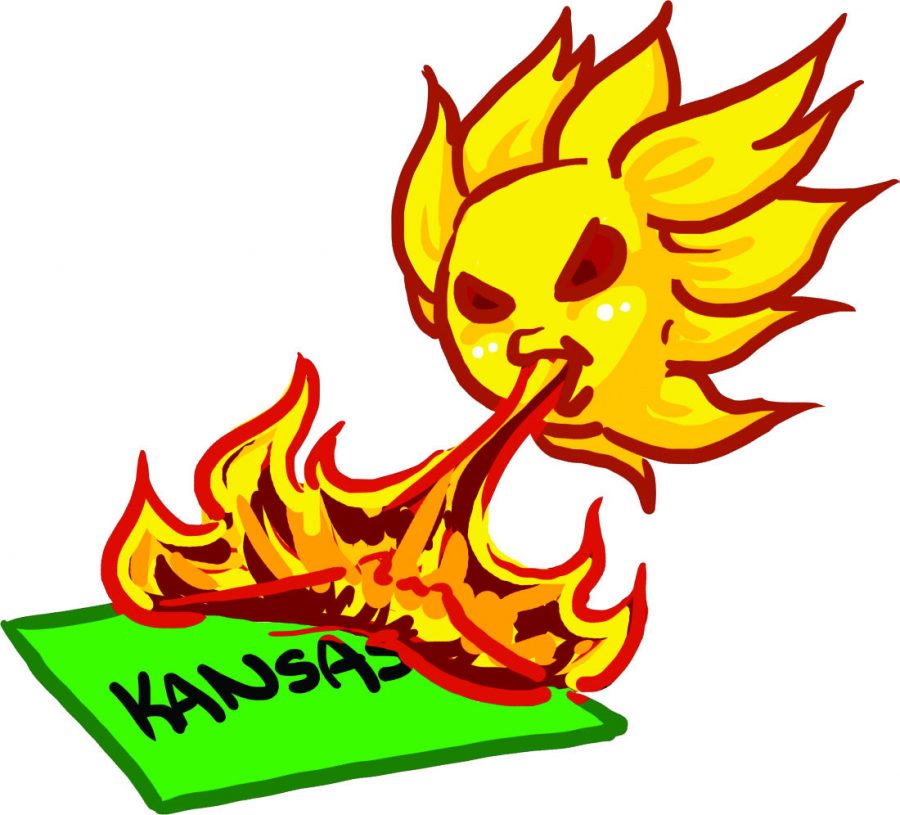 Pushing For Eco-change: Henderson Learning Center hosted a panel of energy and environmental experts last week who discussed how climate change could impact the future of Kansas.

A panel of environmental experts met on Wednesday, March 25th, in the Henderson Building to discuss pollution and the impact of an altered global environment on Kansas.

“The big issue with climate change is the carbon dioxide emissions primarily from the burning of our fossil fuels,” Bayless said.

Bayless said the more carbon dioxide we put into the atmosphere, the warmer the average temperature ends up being on the Earth. He said that the major problem is the melting of the ice, and that it will end up inundating the coastlines.

Bayless expressed great concern over what climate change could mean for the future of the Midwest.

“We are safe in Kansas from a direct impact of flooding from sea level rise, but we are not immune to having to pay to move society away from the coastline,” Bayless said.

If climate change really does start taking off Bayless said we would have to move every single human being that lives in areas such as the southern third of Florida and New York City.

Besides the economic aspect of moving the population away from the coastline, Bayless also pointed out the potential for economic impact due to the environmental changes that could occur in Kansas.

Bayless said that by the year 2100, corn yields in Kansas are expected to drop close to five percent.

“The evaporation of water and the increased temperature are going to make Kansas’s climate feel something more along the lines of south Texas,” Bayless said. “The agricultural infrastructure we have built in Kansas will have to be rebuilt in southern Canada.”

The panel also concluded that there is no more room for debate scientifically about climate change.

“I guarantee that you will still hear individuals in the press and in the State House here that want to debate it. It’s not a debate in the scientific community though,” said Bayless.

“I would agree that there is broad consensus, it is clear there’s a change going on,” said Loveless. “We know that the earth is always changing. The concern now is is that rate increasing? Are we humans and other organisms able to adapt to that great of a change?”

Barnett suggested that economics could be a better method of encouragement than environmental protection as a means to help curb climate change. He said he often works with really terrific people on making investments in renewable energy or energy efficiency.

“A lot of times they’re not doing it because they want to protect the environment or because they believe in or care about climate change, but I don’t really care,” said Barnett. “They’re making investments, and as we think about more renewable energy, that’s less fossil generation. It’s good for Kansas, it is making jobs, and it’s reducing greenhouse gases.”

Barnett said that renewable energy use in Kansas has gone up to twenty percent.

The panel agreed that fossil fuels and coal plants have been contributing to environmental concerns, and that renewable energy is key in solving the issue.