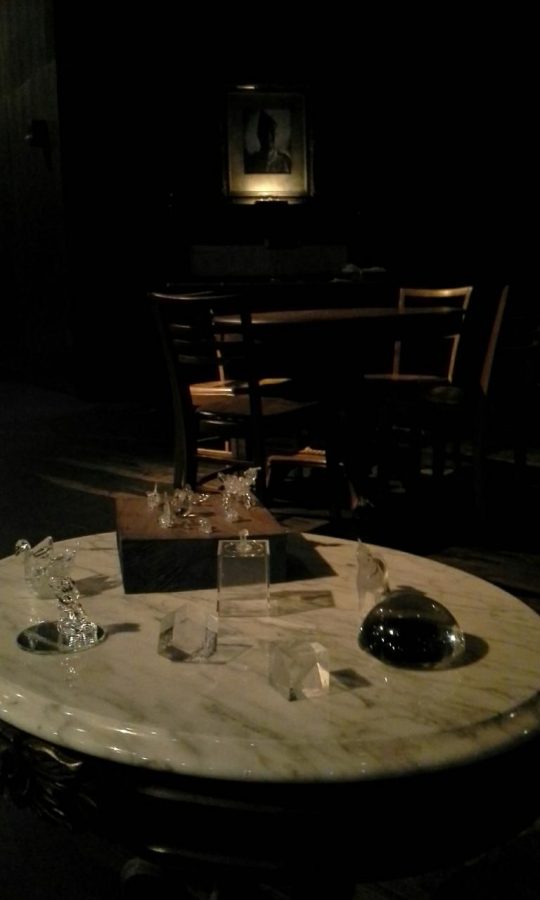 Picture of the set from "The Glass Menagerie. The play runs this Friday and Saturday at 7:30 P.M. and Sunday at 2 p.m. at the Andrew J. and Georgia Neese Gray Theatre inside Garvey Hall.

“The Glass Menagerie” is playing this Friday and Saturday at 7:30 P.M. and Sunday at 2 p.m. at the Andrew J. and Georgia Neese Gray Theatre inside Garvey Hall.

The play is a classic by Tennessee Williams, who is notorious for his tragic plays set in the South, such as “Cat on a Hot Tin Roof” or “A Streetcar Named Desire”.

Set in St. Louis in the early 20th century, “The Glass Menagerie” focuses around the struggles of the low-income Wingfield family with no father figure around, and may even be considered a representation of Tennessee Williams’ own life story leading up to the beginning his writing career. The set is highly realistic, looking almost like a view from a window into the family’s 20th century apartment.

The family is held together by the mother, Amanda Wingfield, who is played by Grace Foiles. Foiles does a magnificent job of portraying a hearty Southern woman with a heavy Southern accent, and even goes on to add some extra Southern sass, a true characteristic of women from Mississippi.

Amanda works as a telemarketer, selling subscriptions to her friends, while her son Tom, played by Austin Swisher, works in a warehouse, a job he thoroughly hates. Tom is thought to be the portrayal of Tennessee Williams in the play, an intellectual who feels pent up by the monotonous work he is stuck doing to keep his family under a roof. Swisher does an excellent job of playing Tom, making sure to always have a thinking look on his face.

Intermittently throughout the play, the spotlight shines on Tom, who then narrates the situations at hand and the thoughts on his mind. Swisher’s delivery of these small speeches is interestingly reminiscent of Toby Maguire’s narrations as Nick in “The Great Gatsby” movie.

Laura is aware of Tom’s wishes to escape from his warehouse prison and travel, a wish she says can be pursued once a man comes to take his place as caretaker for his sister and central character of the play, Laura, played by Amy Reinhardt. Reinhardt excellently portrays a shy and delicate woman with a crippled leg, whose single passion seems to be collecting glass animals.

The play’s first act depicts Amanda’s discovery that Laura has dropped out of business college due to her nervous nature, and Amanda’s rising suspicion with Tom’s late night ventures. Amanda fears that Laura will not be able to support herself, and in turn continuously pesters Tom about bringing home a “Gentleman Caller”, or in other words, a man for Laura to marry. Tom expresses concern over the opinions that people outside the family might have of Laura for her shy nature and her physical defect. “Laura lives in a world of little glass animals”, as Tom puts it.

The second act of the play sees a Gentleman Caller finally arrive for Laura, in the form of Jim O’Connor, played by Andrew Fletcher. Jim plays the role of the ordinary man from the outside world, and serves to attempt to bring Laura out from her nervous shell. Fletcher does a great job of playing the part of the kind, ordinary man. The audience discovers otherwise as the second act unfolds, however.

The Washburn Theater Department’s performance of “The Glass Menagerie” is one of the better productions this season, with a small, four-person cast that allows for each character to have an impact on the audience. Each cast member has a chance at capturing the audience’s attention, and each does an excellent job of holding that attention.