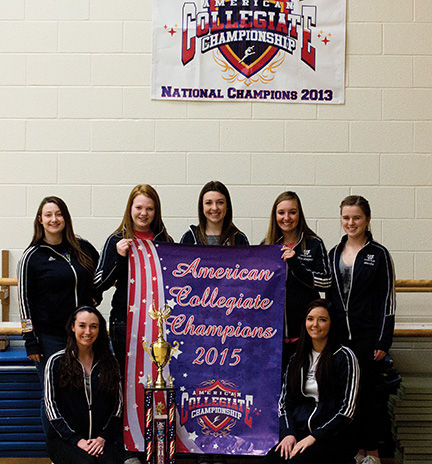 You’ve probably seen them in action at Ichabod basketball games and during homecoming activities, but did you know that the Washburn University Danc­ing Blues are two-time national champions?

Last month, the squad traveled to the University of Northern Texas, as they do almost every Spring, for the American Dance/ Drill Team National Champion­ships. One of 33 colleges in the competition, the Dancing Blues took first place with a score of 292 out of a possible 300. Scor­ing at the competition is divided into three categories – choreog­raphy, presentation and execu­tion with scores determined by a panel of three judges. The team danced all over their competi­tors, earning individual scores of 99, 97 and 96 from the judg­es.

“I would say everyone was pretty excited,” said coach An­gie Price of the victory. “This Dancing Blues team really worked together and they were willing to put aside what they wanted for themselves and do what was best for the team as a whole. I think that really helped us excel. Not only at Nationals, but through the entire season. That attitude really helped us at the competition.”

In her 26th year as head coach of the Dancing Blues, Price, who also serves as an adjunct Kinesiology professor, has be­come one of the winningest coaches at Washburn, earning her first national championship at the same competition in 2013. Of the current Dancing Blues, co-captain Monica Conaway, Lexi Lemons and Madison Wil­liams were members of that team.

For this year’s competition, the team, which was selected in April of last year, began re­hearsing their winning routine in June. To help with choreog­raphy, Price enlisted the help of famed choreographer Man­dy Borgelt, who once served as the coach of KU’s Rock Chalk Dancers.

Thirteen of the sixteen mem­ber squad traveled to Texas for the competition last month, where the Dancing Blues strut­ted their stuff in a two-minute routine set to the tune of “Sweet Disposition” by Australian in­die-pop act The Temper Trap.

“If you could see the perfor­mance then compared to the performance now, there’s a huge difference,” Price said. “I think that’s a testament to how hard they worked this season.”

When not tripping the light fantastic, the squad spends time giving back to their communi­ty. Their most recent act of al­truism was to adopt Emerson Selk, the older sister of Karis Selk, the seven-year-old cancer patient who was named an hon­orary member of Washburn’s volleyball and women’s basket­ball team.

The team named Emerson an honorary member of the Danc­ing Blues and let her in on some sideline action during a home basketball game.

“She really enjoyed that. I saw her the next day and she told me how much she loved it,” said Conaway.

The team also made Emerson a part of a longtime Dancing Blues tradition.

“We have a tradition where we pass on a teddy bear to a member of the team. This year we passed it on to her instead of a team member because we felt like giving it to her meant more,” Conaway said.

Tryouts for next season’s squad will be held on April 26. Those interested in being a part of Washburn’s Dancing Blues can email [email protected]­burn.edu for more details.

Editor’s Note – The original posting of this article erroneously named the Dancing Blues coach as Angie Smith. The article has been revised with her correct name Angie Price. Our apologies to Coach Price for the error.