The Book Owl: ‘We Should Hang Out Sometime’ delves deep into relationships’ 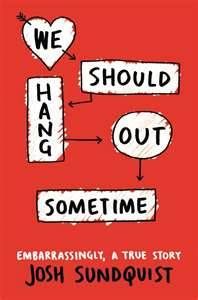 For those unaware, Josh Sundquist is a successful youtuber, paralympic skier, cancer survivor, motivational speaker and self-proclaimed math geek. In his debut nonfiction novel ‘We Should Hang Out Sometime’, Sundquist chronicles his various failed romances from childhood through college – emphasis on “failed.” The entire premise behind this book came about when Sundquist was twenty-five years old and realized that he had never had a girlfriend before. Sure, he had been on dates and kissed people before, but he had never been in an actual relationship, and he decided to figure out what was wrong by revisiting girls from his past.

I’ve never quite read a book like this before, its format is not something you see everyday, which is a huge part of its quirky charm.

Sunquist focuses on the six main almost-relationships of his life in order, first by detailing the gist of his account of what happened between them, offering a brief hypothesis of what went wrong and finally reconnecting with each girl to ask them their opinion.

This was a strange change of pace for me because this book is so engaging and well-written and I kept forgetting that this wasn’t fictional. All of these people are real (save for name changes for privacy’s sake) so I can’t fairly critique how a real person’s story arc played out because Sunquist makes it clear from the get-go that he is giving us full-disclosure into his every awkward misstep, misread signal, disastrous date and terrible first kiss. He seriously spent twenty whole minutes talking to a girl about kissing her before just bucking up and doing it!

What really sold me was how mature he was in all of this and ready to accept the brunt of the blame. It would have been so easy to say “Poor me, girls are all the same!” but he treats them like human beings and accepts that he is the common denominator in all of these failed relationships and that we all have room to grow. The story does get somewhat repetitive as we keep getting our hopes up, watch him crash and burn and see a pattern he couldn’t until it was too late.

I really enjoyed myself reading this! I could seriously identify with some of Sunquist’s experiences, and even the ones I couldn’t I still enjoyed reading about, like his transition from homeschool to public school and the difficulties of having only one leg. He struck this great balance of frank humor and sobering honesty, and while I would have liked better closure from each relationship’s story, that’s not what this book was about.

It’s about putting yourself out there and accepting our mistakes with humor so we can find our own happily ever afters -whatever they may be.