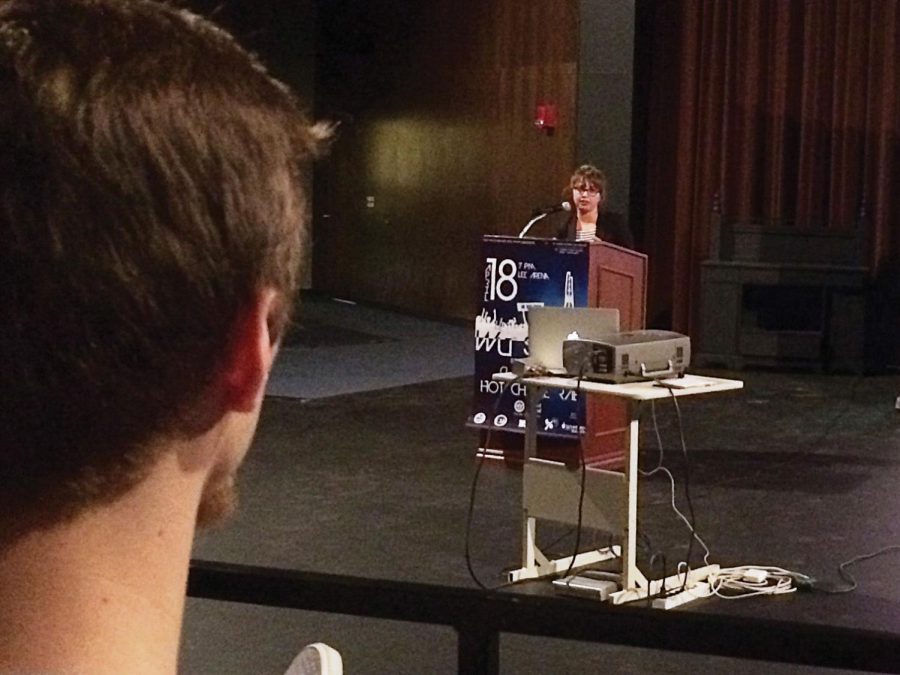 YouTube blogger and sex-education advocate, Laci Green, visited campus on April 2 and spoke to students regarding the presence of rape culture in today’s society.

The event was held in the Neese Gray Theatre and was sponsored by a number of organizations on campus including Campus Activities Board, S.T.A.N.D., and Student Activities and Greek Life. Green’s presentation, “Taking Down Rape Culture,” addressed the way that sexual violence has woven itself into American culture and how individuals can combat it.

“Sexual violence is widespread,” Green said, “But instead of being seen as a serious social issue, it’s seen as an inevitable fact of life. Right? This is just going to happen. This is how the world is. This is how men are – this is something people tell me all the time – this is what men do. Sexual violence is confronted not with outrage, as it should be, but with tolerance and excuses.”

She then described a study of college campuses conducted by The Center for Public Integrity in 2009, which found that there is indeed a lack of judicial repercussions for perpetrators of sexual assault, leaving the victims traumatized and no justice served.

“75-90 percent of attackers remain on campuses, in fraternities and on sports teams. The trauma of assault is compounded by a lack of institutional support and disciplinary action,” Green said.

Above all, Green’s presentation specifically addressed the question of what rape culture actually is and broke it down into four main factors that keep rape culture aflame. She explained that in a rape culture, rape is common, considered inevitable, excused and tolerated.

“Victims don’t cause rape, rapists do. This is a very common sense fact that our culture really has a hard time processing right now,” Green said. “Someone makes a deliberate decision to sexually violate someone. That’s what causes rape.”

“It’s so pervasive that each and every one of us has been conditioned to really evaluate a woman’s looks right off the bat and to evaluate their sexual appeal, particularly sexual appeal to men, right off the bat. This is how we’ve learned to see women and it’s because of these aggressive portrayals that we see all the time,” Green said.

Green hoped that from her presentation, students would take with them a better awareness of rape culture and the ability to recognize these trends and patterns that have become so common in today’s culture.

For those wanting to become stronger allies for their peers, she recommended getting involved in the discussion of how to build a safe and healthy community.

“Speaking up, using online platforms, attending the sexual assault policy hearings that are going on, becoming a peer mentor, becoming an advocate in their own communities, and starting those conversations with people that they know,” Green said. “There’s just a million little ways and it doesn’t even have to be like this big kaboom thing, right? It’s all of the small things that really add up to a big change.”

The sexual assault policy hearings Green mentioned are in reference to the forums Washburn will hold this month addressing its sexual assault policy change. The forums will present the changes made to the policy and open up for question and answer style discussion. The forums will take place three times this month: April 13, 3p.m., in the Vogel Room; April 15, noon, in the Kansas Room; and April 23, 7p.m., location to be determined.