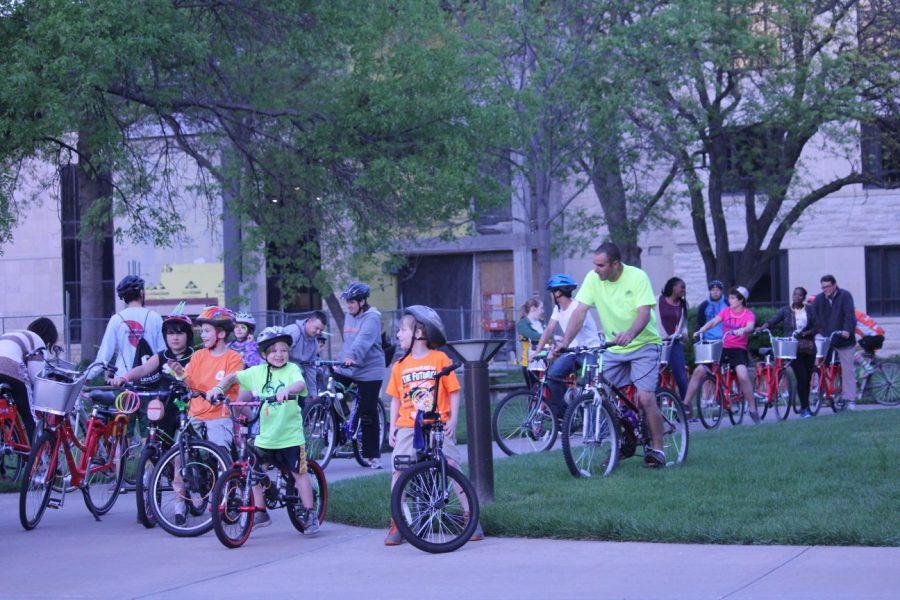 The Topeka Metro bikes allow students to rent a bike and ride it around campus for $20 a year.

With the appearance of the new bikes on campus, the WU Glow Ride event was created to encourage students to grab their own bike, or a rented metro bike, and learn how to safely bike around the community. Glow sticks, prizes and snacks were provided to students who attended the event.

“[This event] was an amazing opportunity, not only to experience a different type of community event, but also to show support of Topeka and the great opportunities it’s providing,” said Veronica Diaz, senior mass media major and co-chair of WU Glow Ride.

WU Glow Ride, which took place from 7:30 p.m. to 9 p.m. on April 28, had students bike from the Washburn Bell Tower to the Capitol Building. Students who registered for the event beforehand were given a water bottle and free subway sandwich. Over 80 students, community members and faculty signed up for WU Glow Ride.

“The WU Glow Ride is our effort here at the cyclists of Washburn, who are teaming up with Topeka Metro Bikes, to promote bike riding here on campus. I personally got involved in this because of my public relations class; we were to help promote the bike share program with students,” said Diaz.

Diaz said the class teamed up with the Cyclists at Washburn group to coordinate and create the event.

“[WU Glow Ride] was a chance for people to try out the metro bikes; to give [students and faculty] an incentive for signing up and to try out the program before [students] leave for the summer. We wanted to give the opportunity for people to find out the functions of the bike but also to get cycling more present on campus and to just have a good time,” said Olivia Marshall, junior mass media major, co-president of Cyclists at Washburn, and chair of WU Glow Ride.

Live music and a speech from Karl Fundenberger, director of bicycle operations at Topeka Metro, were provided once bike riders arrived at the Capitol Building. After spending some time at the Capitol, riders took the Shunga Trail back to Washburn.