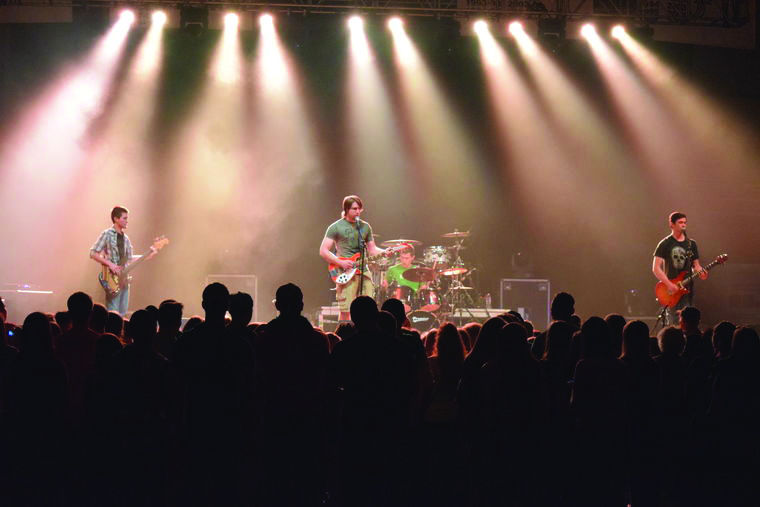 Washburn University hosted its first WU Stock concert at the Lee Arena this past Saturday, April 18, in honor of the 150th anniversary of the school being opened. Over a third of the gymnasium was full with concertgoers, and the crowd’s energy was high for all three acts.

The Swift Kicks started the show off last night, as promised when they competed in and won the Washburn Battle of the Bands last month. The band was very happy with their performance, and were thankful for an expert sound technician.

“The sound was like something we’ve never done, having good sound was fantastic,” said drummer Kegan Kennedy.

“It improves your confidence so much, knowing you don’t have to worry about how balanced you sound,” said frontman Ian Mullins.

Songs played in their lineup included a cover of the Black Keys’ song “Lonely Boy”, and a mash-up of “Boulevard of Broken Dreams” by Green Day and “Pumped Up Kicks” by Foster The People that the band calls a “double cover”.

“We put two songs together kind of by accident, because we were playing one song and were like ‘yeah, that kind of sounds like the chord progression to this other song,’” said guitarist Jack Moore.

Following the Swift Kicks’ set, solo pop-rock musician Clark Kelly played an acoustic set that also featured a piano played with his feet. The crowd continued to cheer him on throughout his performance. Many concertgoers said they were impressed with the impact the solo artist made by himself.

“Clark kept the audience’s attention and warmed up for an incredible performance by Hot Chelle Rae. It was such an exciting atmosphere, absolutely loved it!” said Britney Holden, a concert attendee and Washburn student.

After his set, Kelly commented on surviving in the music industry as a one-man band.

“It’s just trying to figure out the best way to make an impression with what I have access to,” Kelly said. “It’s a lot of throwing things at the wall.”

Hot Chelle Rae took to the stage following Kelly, and came in swinging hard. Throughout the show, multiple concertgoers mounted their friends’ shoulders and waved at the band. They played multiple hits including “Tonight Tonight,” and new songs from their upcoming album “Recklessly”. The group even performed a small improvisational version of “The Fresh Prince of Bel-Air’s” theme song.

“I heard about Hot Chelle Rae from high school, so I could say I’m a pretty big fan for them,” said Rayhan Makarim, a concert attendee and Washburn international student.

Hot Chelle Rae declined to comment on the concert, due to needing to leave immediately after the show for another performance the following morning.

Overall, the event coordinators expressed great satisfaction with how WU Stock turned out. Chance Barrow, the lead coordinator of WU Stock, went into detail about just how much hard work over the past year went into making it happen.

“Last year we went to a conference, learned how to put on concerts, and we basically just learned from the ground up. We wrote a forty-two page contract, and went and found some donors, and we got a large, large, large amount of money from Capitol Federal. There were about twenty-two of us last night and we put the whole stage up, all of us together, it took three hours. It is like building a little building,” said Barrow.

“We love Hot Chelle Rae, they’ve been great, so it’s been a great experience so far.”