The Washburn Review • May 29, 2015 • https://washburnreview.org/8531/arts-entertainment/photographic-exhibition-rediscovers-landscapes-that-inspired-ancient-chinese-masters/ 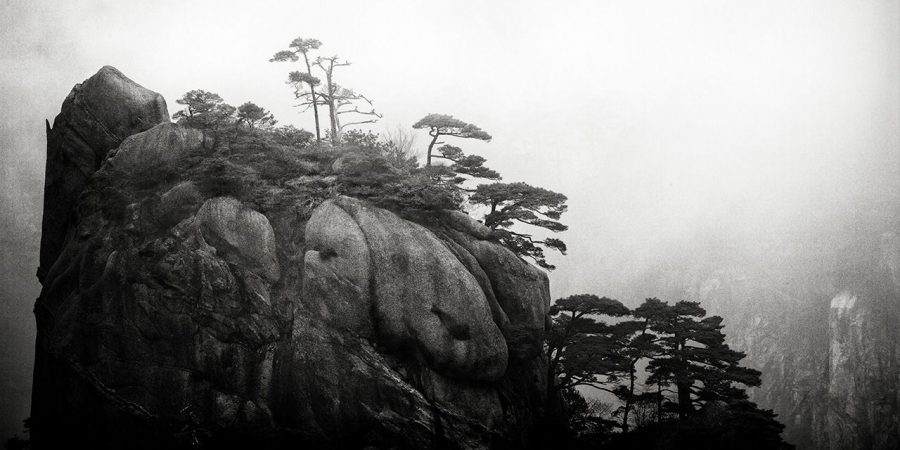 Contemplative photographer Clyde Heppner will display his collection of Chinese landscape photography Friday, June 5 in the NOTO Arts District. The collection, titled “The Ancients’ Views”, captures moments Heppner experienced in the Chinese gardens of Suzhou and the Huangshan Mountain.

Heppner refers to his photographic style as a type of contemplative photography because he believes this style is about trying to listen to what the environment is saying and then bring that spirit forward.

“I’ve always been interested in ancient Chinese paintings,” Heppner said. “When I was a kid growing up in North Dakota and I saw this vertical scroll thing and it was like, ‘What is that?’ And nobody knew anything about it other than somebody got it from somebody who hung it on a wall. Then I started to learn more about that art form.”

During a strict two-week period, Heppner took advantage of an opportunity to travel to China with his mentor, George DeWolfe, and spend time in the region where the artwork of ancient Chinese masters were inspired. During this short time period Heppner implemented detailed plans he had made prior to leaving for China, to visit specific locations the ancient masters had visited. This allowed him to make the most of his experience and also allow him to capture the photos that will be shown at the gallery.

According to Heppner, the most rewarding aspect of his experiences in China was the chance to see the world through the eyes of the ancient masters.

“I actually saw what they saw,” Heppner said. “That in and of itself was mind-boggling. To know that you can go back thousands of years and see what these guys can paint and I can stand in the same places and see those things – that was amazing. That was the biggest reward for me, being able to just try and do what they do.”

Besides a two-week time constraint, Heppner faced other challenges such as the rugged terrain of the Huangshan Mountains.

“These mountains are little granite mountains, like you would see in these paintings, that go straight up and down,” Heppner said. “There’s really very little flat area. You are traversing either straight up or straight down. Going down into canyons, in some of the pieces you’ll see the imagery almost has a glowing aspect to the background, and that’s sort of what it was like to have that light coming up into the canyon – it becomes like embers.”

Prior to his visit to China, Heppner practiced building his skills and contemplated what he would find interesting.

“Having looked at, and sort of studied, a variety of different ancient masters, I had some ideas about what I was looking for,” Heppner said. “So what you see in the collection actually is that in each piece there is a representative ancient master.”

In the end, he decided his goal was to capture the energy of the environment through these photographs.

“If you are studying this sort of art form as a Chinese painter, you would go through a process with your mentor where your mentor would provide you an image, and your intent is to recapture that image in terms of its essence, its chi – not necessarily the direct representation, but the whole chi,” Heppner said. “I’m the apprentice in this situation and I’m looking at what the masters have done.”

Building up to his current collection, Heppner’s first exhibit was shown in 2011 at the National Art Museum of Sport. According to Heppner, the museum still holds a soft spot in his heart to this day. Since that exhibit, he has had his work shown in several different venues, such as the Center for Fine Art Photography in Fort Collins, Colorado and the San Francisco International Exhibition. His most recent portfolio, The Ancients’ Views was also featured in a 2014 solo exhibit at the Griffin Museum of Photography located in Winchester, Massachusetts.

“I’ve always had an interest in art and so there wasn’t any official start time for that, and it was really more about whether or not I was willing to take my work public, and that happened back in 2009,” Heppner said. “I started to do some work with some known photographers, acquired a mentor and began to build my skills to understand what my vision might be.”

Before photography, Heppner explored several different mediums in which to express his artistry.

“I wanted to be a painter, but I’m not really great with oils so that wasn’t going to happen, and I didn’t have an affinity for acrylics, so I started with pastels and had a lot of fun, but I’m so allergic to dust that it just became a very bad experience,” Heppner said.  “I had done some photography early on that was back in the film days and decided I should pick this up and go back to photography.”

Heppner’s exhibit is free and open to the public. It will be held in the Two Wolves Studio & Artist Den, located at 837 1/2 N. Kansas Ave. in the NOTO Arts District during the First Friday Art Walk.

Additionally, the reception for the exhibit will take place 5 – 9 p.m. June 5 in the same location.

“I’m excited to meet people here,” Heppner said. “That’s really my biggest thing. I’ve done some things locally, but most of my stuff has all been outside of this region, so it’ll be great to get a response and see what people think of it.”