The Washburn Review • May 22, 2015 • https://washburnreview.org/8500/news/dozens-rally-at-capitol-to-protest-brownback/ 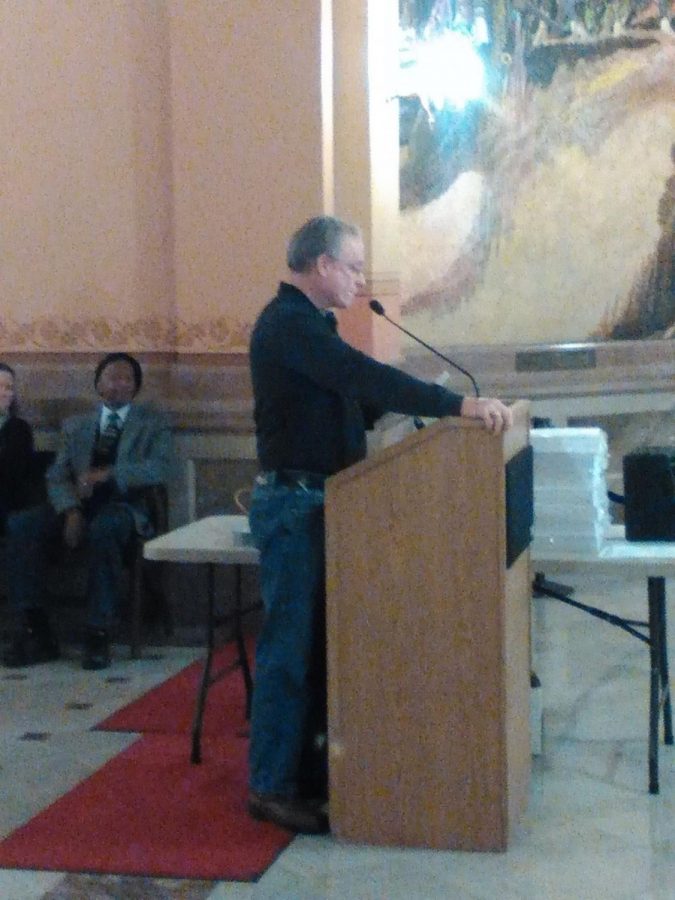 Nearly 100 protesters gathered Friday, May 22 in the rotunda of the Kansas Capitol Building for the Rally to Restore Kansas Values to hear speakers discuss their concerns over current Kansas Gov. Sam Brownback’s legislative choices.

“I was just frustrated, and I was frustrated with the election and looking ahead at another four years of the direction that Governor Brownback was taking the state in and felt that I, as a citizen, had to do something,” Piazza said. “So I just used electronic media to voice my opinion, and apparently it caught on. We have 38,000 people that have signed the petition.”

The event began with Rev. David Carter from the First Unitarian Universalist Church of Wichita giving an invocation.

The invocation was followed by Rev. Sarah Oglesby-Dunegan of the Unitarian Universalist Fellowship of Topeka who explained a call and response used several times during the rally in which speakers would use the phrase “But Kansans say” after describing a political injustice and the audience would respond, “That’s not right” or “That’s not Kansan values.”

Al Frisby, a retired biology teacher, Merriam City Council member and organizer for the Johnson County Moveon Council followed, ran through a list of actions done by the governor and  the Kansas Legislature, including cuts being made to the Kansas Public Employees Retirement System (KPERS) and an increase in food and sales taxes. The attendants gave either a positive or negative response. The overall response was overwhelmingly negative.

The next speaker to present was Heather Robinson, a teacher and a Kansas National Education Association (KNEA) member. She spoke passionately about the negative impacts of cuts to education, specifically special education and the arts.

She was followed by Davis Hammet, director of operations at Planting Peace, who spoke about the discriminatory policies of Brownback’s administration toward individuals in the lesbian, gay, bisexual and transgender community.

Rev. Carter returned to the podium after Hammet spoke to speak about the disconnected nature of the values of Brownback’s self-proclaimed Christian faith and his actions and legislative policy. Petition author Piazza then shared his hopes about energizing Kansans and retaining the “four Kansas values” of support for education, strong roads and infrastructure, charity, and common sense.

Finally, Djuan Wash, director of communications at Sunflower Community Action, spoke to the crowd about the racist comments and actions of the Kansas Legislature, specifically toward undocumented immigrants as well as the hardships placed upon those on welfare by Brownback.

Once all of the speakers had presented their topics, the group delivered the petition and all of its signatures in paper form, which required eight individuals to carry.

“We’re just trying to use this as a platform to energize the populace, to educate all the voters, because only 50 percent of registered voters voted in our last election, so we really would like to have people informed and educated about the direction the state is going in and what is actually happening,” Piazzo said.

Among those in attendance were several Washburn University students, including junior theatre major Alexander Laughlin.

“This let’s citizens have the opportunity to speak out against what Mr. Brownback is doing, so I was really uplifted and really encouraged to speak out more against this by attending this rally,” Laughlin said.