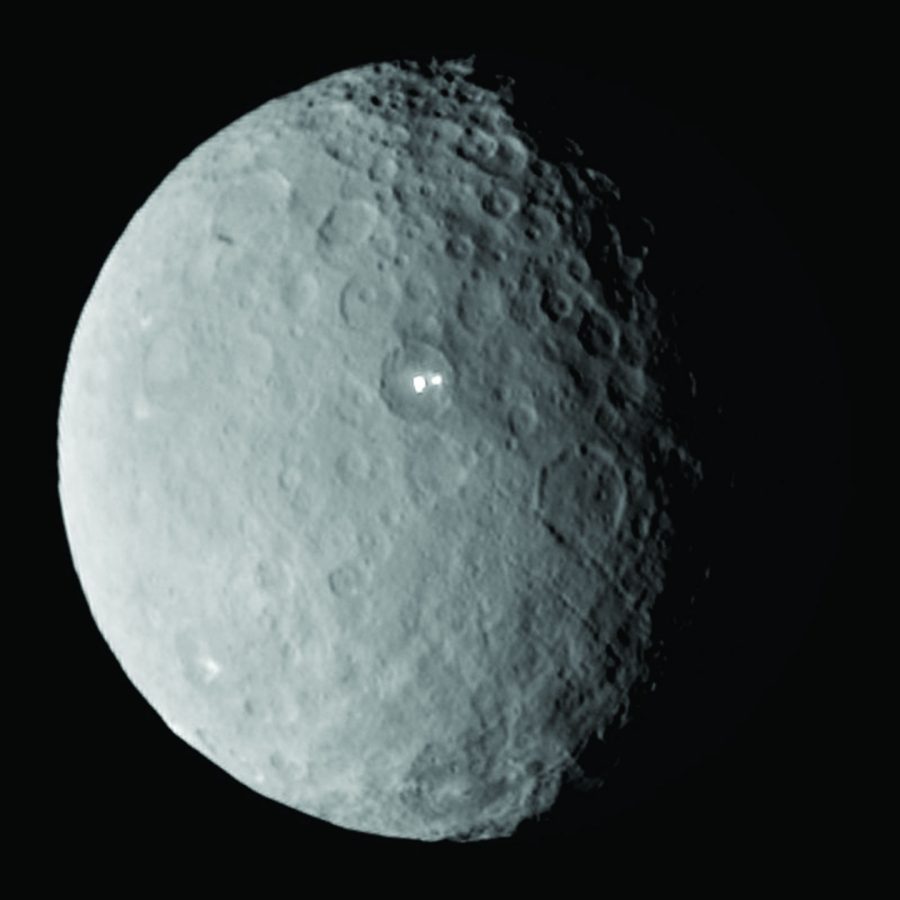 Two bright spots appear in a crater. Scientists wonder if there is ice on the surface. As Dawn spirals closer, more photos will be taken.

Throwback Thursday – where we as a paper look back on the history of Washburn and The Washburn Review.

This story, published earlier this year, is currently the most viewed article in our websites history.

On March 6, 2015, after nearly eight years and 3.1 billion miles, NASA’s Dawn spacecraft became the first spacecraft to visit and orbit a dwarf planet.

Launched in 2007, Dawn used ion thrusters to slowly change its orbit around the solar system. It first went into orbit around the asteroid Vesta in 2011, and spent 14 months surveying the rocky world. Then it fired its ion engines again to break orbit and begin its long journey to the dwarf planet Ceres. Upon orbit insertion, Dawn officially became the first spacecraft to orbit two separate extraterrestrial bodies.

“Dawn’s ambitious expedition would be truly impossible without ion propulsion,” said Marc Rayman, mission director of Dawn in a blog post on March 6.

Dawn uses ion propulsion, a form of electric propulsion that creates thrust by accelerating ions of a particular gas and “throwing” them out of the engine. In Dawn’s case, the propellant is Xenon. Ion systems can change velocities in space with extreme efficiency, but at a cost: it takes a lot of time.

“If you hold a single sheet of paper in your hand, it will push on your hand harder than the ion engine pushes the spacecraft at maximum thrust,” said Rayman.

Rayman said at the current throttle level, it would take almost 11 days to accelerate from zero to 60 miles per hour.

Dawn’s orbit insertion around Ceres was different from typical orbit insertions around other planets. Rayman said a Mars orbit insertion usually involves anxious people monitoring telemetry on computer screens while the spacecraft executes a bone-rattling, whiplash-inducting burn of its main engine to drop into orbit.

“If you had been in Dawn mission control, the scene would have been different,” Rayman said. “You would mostly be in the dark. The computer displays would be off, and most of the illumination would be from the digital clock and the string of decorative blue lights that indicate the ion engine is scheduled to be thrusting.”

Because Dawn uses a very slow ion propulsion system, it is able to very carefully move itself into an orbit similar to the dwarf planet’s orbit around the sun with only a 100 mile per hour difference between Ceres and Dawn.

“If Dawn had stopped thrusting before Ceres could exert its gravitational control, it wouldn’t have flown very far away,” Rayman said. “The ion propulsion system provides such exceptional flexibility to the mission that controllers could have guided it into orbit some other time. This was not a one-time, all-or-nothing event.”

Ceres lies between Mars and Jupiter in the asteroid belt. It is 590 miles in diameter, and has a year of 1,680 days. Its gravity is 1/36th that of Earth.

It was discovered in 1801, and originally declared a planet. Soon, more “planets” in this region were discovered. It wasn’t long before it was realized a new type of solar system body had been discovered–asteroids–and Ceres was reclassified as such.

With clearer and clearer pictures being taken by the Dawn spacecraft, many images show “reflection” spots in one of the craters. Some scientists speculate that this may be water ice on the surface. Observations from Earth suggest that Ceres may have a 100-kilometer-thick icy mantle containing more than 200 million cubic kilometers of water. If verified, Ceres would have more freshwater than Earth.

As Dawn spirals down closer to a final 230 mile high orbit, it will begin its science mission around the dwarf planet. What are those bright spots? Does Ceres have a thin atmosphere? What does this mean for human exploration? Does Ceres have any moons?

“While the search will continue, so far no picture has shown evidence of companions orbiting Ceres,” Rayman said, “And yet, we know that as of today, Ceres most certainly does have one. Its name is Dawn!”