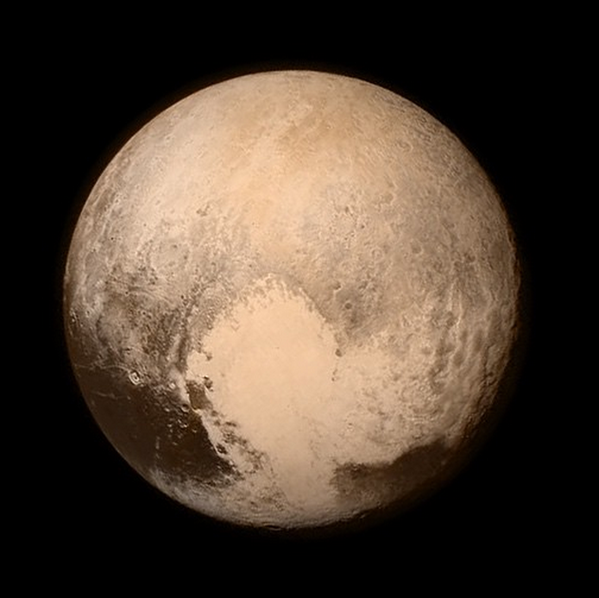 The former planet, Pluto, was visited by a spacecraft sent by humanity for the first time on July 14, 2015, and the images returned are dazzling scientists.

New Horizons launched on January 19, 2006 and traveled three billion miles to fly by Pluto at over 8.5 miles per second at 6:49 a.m. central daylight time. The spacecraft’s closest approach to pluto was 7,800 miles. Mission controllers had to wait over nine hours before confirmation that the flyby was successful.

“We have a healthy spacecraft,” said Alice Bowman, the first female mission operations manager, as the data finally streamed in. “We have recorded data on the Pluto system and we are outbound from Pluto.”

The operations room erupted in cheers and applause. Some even cried. Many spent most of their career on this mission.

The first data only confirmed that the spacecraft was healthy and full of data on the Pluto system. The first images wouldn’t beam down till the next morning and released during a press conference at the John Hopkins University Applied Physics Laboratory.

The images completely surprised scientists, as they thought they would.

“I don’t think any one of us could have imagined that it was this good,” said Alan Stern, principal investigator for the New Horizons mission.

The first image shown of Charon, Pluto’s largest moon showed very few craters and varied terrain – implications of an active Charon. There are cliffs and troughs that stretch about 600 miles showing widespread fracturing of the crust. According the science team, this suggests an internal process is at work on the planet.

Pluto also has an apparently young surface. The first close up image, showing less than 1 percent of Pluto, showed no craters, and ice mountains rising as high as 11,000 feet above the surface. Scientists think the mountains formed no more than 100 million years ago.

“This is one of the youngest surfaces we’ve ever seen in the solar system,” said Jeff Moore, Geology, Geophysics and Imaging team leader of NASA’s Ames Research Center in California.

Stern said in the press conference that young surfaces on smaller bodies like Pluto and Charon are only seen around large planets, like Jupiter, where the strong tidal pull of its gravity squeezes the body creating heat.

“The one thing we can say for sure is tidal formation is not at play here,” Stern said. He said that was because Pluto and Charon are tidally locked, meaning one side faces the other all the time, much like the earth’s moon.

John Spencer, deputy geology and geophysics lead, said this may show that even in very small bodies, radioactivity can be part of a planet’s activity

The science team also announced that the heart shape region on pluto has been named Tombaugh Regio, after Clyde Tombaugh, the discoverer of Pluto.

The entire data set that was collected in the flyby is expected to take up to 16 months to send back to Earth. When all is said and done, the entire illuminated part of Pluto is expected to be imaged with some terrain at higher resolution than others.

Pluto was discovered by Tombaugh in 1930 and has been no more than a blurry pixel in all images until New Horizons started to pull up to the icy world in May 2015.

New Horizons was the fastest spacecraft ever launched and the first launched directly into a solar system escape trajectory, which requires a speed of 37,000 miles per hour. It carries with it a United States Postal Service commemorative stamp of pluto, which reads “not yet explored” on it. Additionally, some of the ashes of Tombaugh are onboard making it the first human remains to leave the solar system.

More images of pluto are expected to be released to the public and a press conference on Friday, July 17 at noon CDT. These will include more close up views of Pluto’s surface as well as details of the atmospheric composition.

“I don’t think any one of us could have imagined it as this big of a toy store,” Stern said.