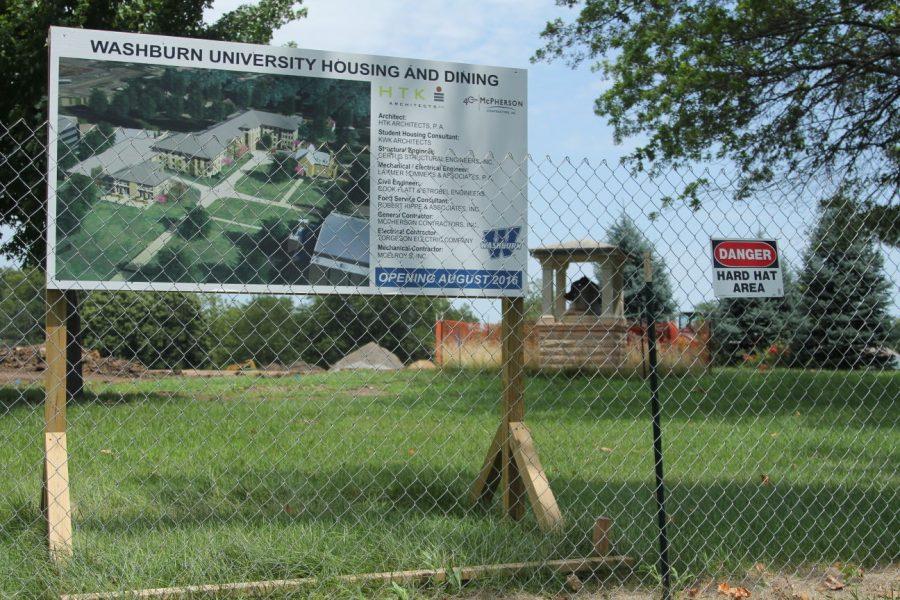 Danger: Hard Hat Area. Ground has been broken for new dorms and a dining area for students attending Washburn in Aug. 2016.

Washburn University is about one year away from completing a new set of dorms on the east side of campus, which is expected to be completed around August 2016. The dorms will allow more students a place to stay on campus.

Rick Anderson, vice president for student affairs at Washburn University, said that the new building will include 354 beds, including four and six-bed suites. Each suite will have a front room to use with other occupants, and there will be a dining hall for the whole building. The new dining hall on campus may relieve some of the stress from the cafeteria in Stauffer Commons.

Anderson said that the project is on its way to being completed on time, even though it was set behind last May and April by rain.

“We were set back at first by a washout in April and May this last year, but we are caught up and expect to have the project finished on time,” Anderson said. “We were able to stay on budget, and then ended up finding that the bid for the project was even lower than we thought.”

Anderson said that the price hasn’t been set for residents to inhabit the buildings yet, but will be set soon.

Mindy Rendon, director of residential living, said that they won’t be accepting reservations until a later date.

“We can’t take reservations yet, but students are encouraged to sign up for a room around February 2016,” Rendon said. “We are very proud of our new addition.”

Anderson said that they see correlations between the amount of residential living quarters and the amount of people enrolled at Washburn. It isn’t set to get a definite number of new enrollments, but it could definitely help. This could be really great for both sophomores or juniors who already know other students that they would like to live with on campus, but freshmen are more than welcome to sign up for the new building as well.

“We hope to continue to enhance student life on campus, and possibly boost the number of students wanting to attend at Washburn,” Anderson said.