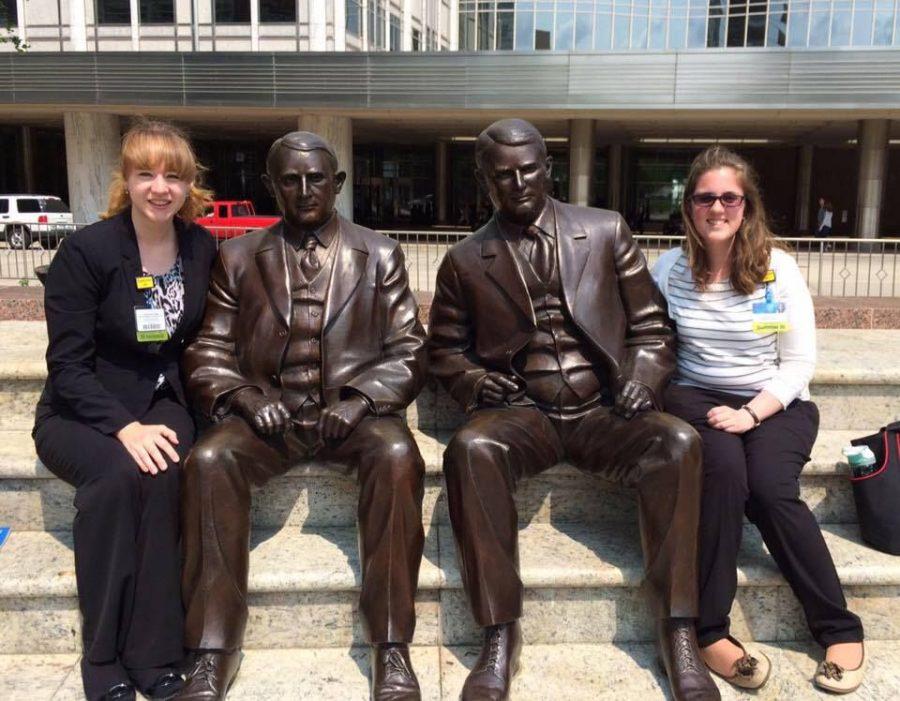 Blaire Landon, left, and fellow extern, Jessica Atton, next to a statue of Will and Charles Mayo. While in Rochester, she and other externs were given a tour of the city as well as the home where the Mayo's lived.

Students are encouraged to take internships or externships during their college years to gain real world experience. There is also a possibility of getting a job after the internship or externship is over. Landon, herself, who was participating in the Summer III Nursing Externship program, was offered a job at the Rochester clinic after she graduates in May 2016.

“I spent my summer on their orthopedic trauma post-surgical unit and I mostly shadowed four different nurses who were my clinical coaches,” Landon said. “I just assisted them and followed their steps.”

“I got to go see a pediatrics surgery one day,” Landon said, “I got to spend a day in the ICU and I got to see a couple of things like that as well.”

Landon said there were some legal limits, such as not being able to give medications, but she was able to help her clinical coaches and learn from them.

The Summer III Nursing Externship program is an externship specifically for nursing students who have completed their junior year. The purpose of the program is to allow nursing students to gain experience by shadowing Registered Nurses and interacting directly with patients.

Landon said over 700 students applied for the externship, but only 57 were accepted. She went on to explain that several of the externs were offered jobs based on their performances during the summer, including her.

Landon read about the externship from a poster in the hall at Washburn.

“I kind of applied on a whim,” Landon said. “I saw a poster about it in the hallway at school and thought, ‘Oh, might as well; it’s kind of a long shot.’ Then I got the acceptance email and I pretty much ran around the house screaming for the rest of the day.”

Landon said that the application process was much simpler than she anticipated. All she had to do was submit her resume, which included an internship she had done the previous summer for the Governor’s Internship program, her transcript, and her answers to a few essay questions about meaningful patient experiences and how Landon had put the patient first in those experiences.

“They told us later, after we were all in the program, that that’s where they really put the emphasis on,” Landon said in reference to the essays. She applied in November 2014 and heard back about her acceptance around Valentine’s Day.

Landon became interested in nursing as an eleven-year-old girl by watching how the nurses interacted with her grandfather who had cancer.

“Then as a freshman, I helped out Kathy Ure in a COACH Mobile Health Clinic in Harveyville and I gained some experience in community healthcare nursing,” Landon said. “It came together, I guess, and it’s been really good.”

“She’s always looking for ways, or exploring ways, to improve her advocacy for her patients and family, and that’s one of the things that really stands out about Blaire: she’s a patient advocate,” Joyce said.

“Mayo has been nice because here the patient really does come first,” Landon said. “The system is built in such a way that nurses can spend the kind of time with patients that I always wanted to.”

Landon said Mayo nurses only have two or three patients at a time, instead of six, so they can spend time with them. She said she’s always been looking for that in her clinicals.

“If I had a family member that was ill, I would want Blaire to be a part of that healthcare team that’s taking care of my family member because I know that she’s going to advocate,” Joyce said. “She can do what is best for the patient and family.”

Landon said that being in a setting where she was with the patients more than once a week really helped solidify everything that she had learned the previous year.

“[It] gives me an opportunity to practice it and get into a daily routine, whereas with clinicals you’re only there once a week or something,” Landon said. “Now I really know what an RNs day looks like.”

Landon said that it wasn’t just the book learning that prepared her for her externship at Mayo. She said the instructors are really good about teaching leadership, professionalism and how to ask questions.

“So I felt like I was prepared to use the opportunity for everything it was worth,” Landon said, “I knew what kind of questions to ask, what kind of things to be looking out for, so it’s kind of a mix of the natural book, patient, clinical experiences I’ve had at Washburn and the professionalism and leadership skills they taught us as well.”

Landon began the externship on June 6 and will complete it on August 14, which allows her to head back to Topeka just in time for classes to start, but Landon feels prepared for this upcoming year.

“I feel to have such a deep immersion into a unit and a patient population is just extremely valuable,” Landon said. “I feel really prepared to go into my senior year and master more skills.”