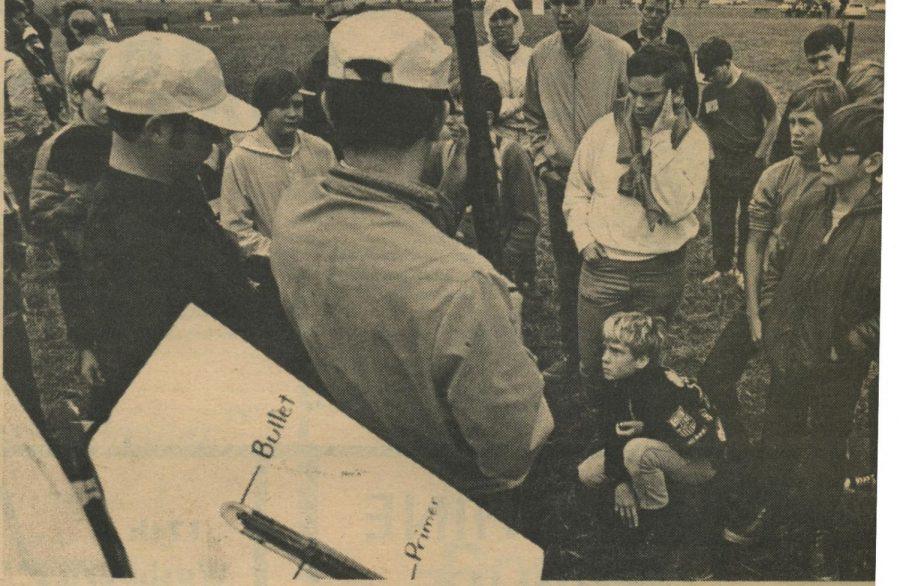 At 7:30 A.M. Saturday morning it was still  misting after an all night shower. There’s probably the main reason only 150 of all the pre-registered young hunters showed up at Shawnee County State Lake to take part in the proceedings. The rest of the kids will never realize just how much fun they missed out on. Perhaps something like this should be organized for adults someday.

To begin with, a little noise and excitement with a trapshooting demonstration down at the range. Loud booing and hissing from all the spectators accompanied each miss by the “expert”, and when a few of the young hunters were randomly selected to shoot a bird or two the last young man, slightly older than the rest, drew a loud cheer from both spectators and instructors when he broke the only bird of all the ones shot at by the youngsters.

With some enthusiasm generated by the demonstration, five large groups were formed and a round- trip for each group to all five stations was on order. At the four instructional stations pointers were given on archery safety, crossing fences the different kinds of firearm action and how that each are operated, hunter-farmer relations,, and other little tips on how not to shoot Daddy in the pants. Station five was a 50 pace firing range which for most the kids was the best part of the whole day. Ten live rounds at an official- sized NRA small arms target (which has a bullseye exactly the size of one .22) for each. The ammunition used, CB caps(slightly smaller that a. 22 short), was easy on everyone’s ears. As a result even the real novices, who were afraid of the noise and kick, were amazed at how easily they mastered the rudiments required to shoot a halfway decent target. The highlight of the range instructors’ day was when one of the registration ladies, and attractive sixteen of seventeen years old, stated casually that she had shot “once or twice”, and then produced the best group of the day. (participants or instructors). She put all ten shots into one jagged hole that you could cover with a quarter!

The Topeka Police Department and South Topeka Gun Club combined efforts during lunch hour to put on a spectacular display including weapons from dinky little. 38’s to pieces designed to put a three or four inch wide projectile clear through the wall of a house.

Well, was it success? I mean, aside from the fact that everyone had a great time, did the youngsters learn anything? Out of 150 entrants, 145 passed the exam at the end of the day. Was the test a pushover? I doubt it, because each child who received a certificate saying he has passed the course can, upon meeting age requirement, obtain a hunting license in any one of the 50 states. Not all the states are like Kansas either, where any dumb ying-yang can get license without even knowing which end the bullet comes from. Some states have such rigid test that many adult fail once of twice before absorbing enough knowledge to be considered safe.

There is something satisfying indeed about a youngster who comes dragging his target back to show you– his heart pounding and eyes shining because out of the only 10 shots he’s ever fired seven are on the paper and ” Hey, man, looka there! One of ’em’s in the black part!”