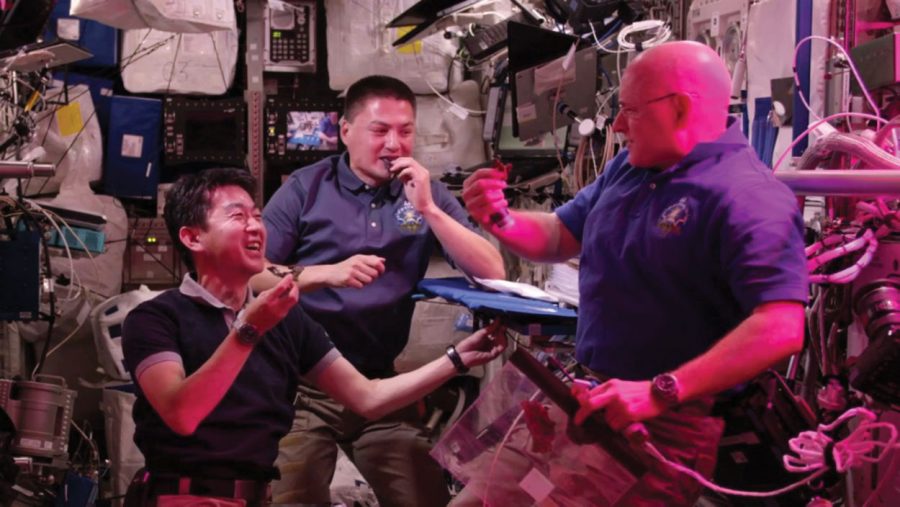 Space-grown food was eaten in space for the first time by astronauts onboard the International Space Station to test plant growing techniques for future space pioneers.

Members of the Expedition 44 crew, including NASA’s one-year astronaut, Scott Kelly, ate Outredgeous Red Romaine lettuce grown in the microgravity environment of space. It was part of NASA’s plant experiment called Veg-01 and is being used to study in-orbit function and performance of the plant growth facility.

“[It] tastes kind of like Arugula,” Kelly said after he ate the red colored leaf.

According to a press release from NASA, after the first crop grown by Veg-01 was returned from the ISS last year, Gioia Massa, NASA’s payload scientist for the experiment, began working with flight doctors and safety representatives to get approval for the crew to eat the produce.

The second set of seeds grown by Veg-01 were activated by Kelly on July 8 and grew for 33 days before being harvested.

Growing plants in space requires different techniques than on Earth. In space, since gravity isn’t pulling an object “down,” scientists had to devise a way to keep soil and water in the same area while teaching the plant which way “up” is.

Veg-01 was developed by Orbital Technologies Corp. in Madison, Wisconsin and was delivered to the ISS by a SpaceX Dragon resupply mission in April 2014.

In Veg-01, the plants were planted in “plant pillows” which are bags of soil with wicks in them. The bags keep soil in place while wicks guide water to soil. The seeds were then attached to a wick so its root facing side was facing the soil. The other side faced red and blue light since those are the colors plants use to grow.

“Blue and red wavelengths are the minimum needed to get good plant growth,” said Ray Wheeler, lead for Advanced Life Support activities at the Exploration Research and Technology Programs Office at Kennedy Space Center. “They are probably the most efficient in terms of electrical power conversion.”

This is the only experiment NASA is currently supporting that involves evaluating the effects of plant life on humans in space. Psychologists are focusing on crew behavioral conditions, team communication psychosocial adaptation.

Future flights to Mars could involve a four to six member crew being confined in close spaces for an extended amount of time with very little communication. Solving some of those stresses could include things like growing plants in space habitats. Studies on earth have shown growing plants are associated with well-being and optimal performance.

“There is evidence that supports fresh foods, such as tomatoes, blueberries and red lettuce are a good source of antioxidants,” Wheeler said. “Having fresh food like these available in space could have a positive impact on people’s moods and also could provide some protection against radiation in space.”

NASA plans to mature the plant growing technology on the space station so that future deep-space pioneers will be able to have a sustainable food supply without worrying about resupply from earth on a regular basis.