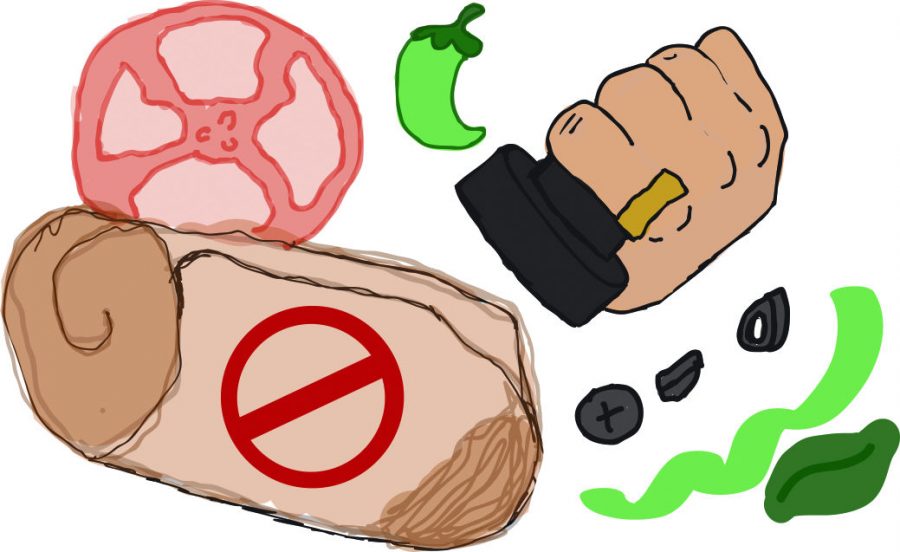 Students and faculty are taking to social media to complain about recent menu changes in the cafeteria.

Students are most angered by the loss of the customizable wraps that were sold last year, and considered the healthiest menu option by some.

Chartwells, the dining company that runs the Memorial Union cafeteria, gave an official statement regarding the change to menu specifically concerning the wraps through Adam Cordova, Director of Dining at Washburn University.

“In an effort to comply with the FDA regulations on labeling, we made menu changes that were to provide calorie and nutritional information on each menu item. Our corporate chef and corporate nutritionist created recipes in a data base for each item. Deviation from the specific menu item would not allow us to provide the required information.” said Cordova.

The Washburn Student Government Association has also given an official statement regarding the menu change.

“Recently, it has come to our attention that Chartwells has removed the build-your-own-wraps station in the Union. As students paying for this, and seeing as how students are the primary consumer for Chartwells, we should be able to have a say in what we’re paying for, or at least notified to it being taken away. It’s concerning to us as WSGA that students weren’t notified or asked for input in this situation,” said WSGA Public Relations Representative Mikayla Douglas.

On Yik Yak, anonymous students could be seen making complaints. One reads “No wraps in the caf means my money won’t be spent there #wrapserrday.” Another reads “Washburn: where the people working the stations aren’t even aware of how to make the new sandwiches.”

Other students, primarily returning students, are expressing their concerns from out of the shadows. Sophomore and LLC resident Viviana Molina is upset primarily because of the limited options for vegetarians caused by the sandwiches replacing the customizable wraps.

“We only have five choices of sandwiches, and there’s only one choice for a vegetarian sandwich,” said Molina. “I’ve tried adding some more vegetables on to my sandwiches before and they would always deny my request.”

Until yesterday, the only way that students could get something similar to the customizable wraps was to pick from the five available sandwiches and request one of them to be made into a wrap. Students still cannot add any ingredients to these preset sandwiches, rather, they can only take them off.

However, following his being informed of the backlash by students regarding the wraps, Cordova also included mention of an extension announced by the FDA until Dec. 1, 2016.

“In regards to this change, Washburn Dining will now allow wraps and build-your-own-subs on the Mondo Station within Union Market, effective Aug. 25, 2015,” said Cordova.

Oddly enough, the wraps are still not available, but sub sandwiches in the cafeteria are fully customizable. Cafeteria employees, however, are refusing to make the sandwiches into wraps altogether now.

Several students who moved into the Washburn Village this semester, a place with a much smaller meal plan than the LLC, are avoiding the Union cafeteria altogether thanks to the menu’s changes.

“Ever since the wraps went away I can’t eat there anymore, just because they’re so good. So now I eat in my room with microwavable lunches,” said Daniel Echevarria, a sophomore and Village resident.

Even some Washburn professors are considering avoiding eating at the cafeteria now that the wraps are gone. Art Department Professor Michael Hager is one of them.

“For the last few years, I have loved going up to the commissary to get a wrap every day. They were great, the service was fantastic, the people were absolutely nice. It was something I looked forward to every day. When I went up there this last week for my first wrap of the season, I discovered that I don’t have the freedom to build my own wrap anymore. That limits me to what I want to eat. If they continue with this system, I will not be eating at Chartwells anymore, and that’s too bad,” said Hager.

Despite Chartwells’s efforts to bring back some customization to their menu, students remain dissatisfied because the wraps are still gone.