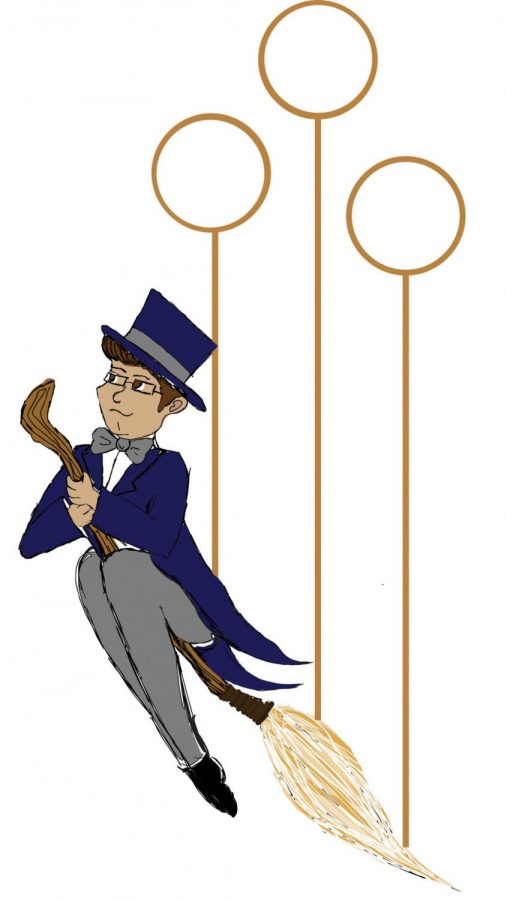 Quidditch, the competitive sport featured in the Harry Potter series, has become an official club in the recruitment stages on the campus of Washburn University.

Hogan and Fluke have been interested in Quidditch since their sophomore year of high school. They formed a team during their junior and senior years, drawing in a diverse group of players through their extracurricular involvement.

“I think it started out for me as a huge love for Harry Potter, but it’s less about that now,” Hogan said. “To me Quidditch is its own kind of culture that is separate from Harry Potter.”

Quidditch is an all-inclusive, full-contact, co-ed sport. The team includes three chasers, two beaters, one keeper and one seeker.

The sport involves a match between two opposing seven-member teams. Each player must have a broom; though many players use a PVC pipe during the course of the game. Aside from their “brooms,” players dress in rugby shorts, tight-fit jerseys and running shoes.

There are four balls at play during the game: the quaffle, two bludgers and the golden snitch.

The chasers use the quaffle, usually played with a slightly deflated volleyball, to score goals that are each worth 10 points. The keeper portrays the “goalie” who defends the three ring-shaped goals at each end of the Quidditch pitch, or the playing field.

“The keepers have to run double duty because they have to play chaser as well. They attack and defend for the team,” Fluke said.

Fluke’s preferred position of keeper stems from his experience as a soccer goalie for eight years.

“I like to play chaser and beater, but it just depends on where I’m needed,” Hogan said.

Bludgers, played with dodgeballs, are used by the beaters to knock out players during the game. If knocked out, a player must return and touch their own goal before resuming their position on the pitch.

“Quidditch is a mix between rugby and dodgeball,” Fluke said. “The dodgeball aspect comes from beaters throwing the bludgers to knock players out of the game and the rugby part essentially comes from running around and getting tackled.”

The final role is that of the seeker. The seeker’s goal is to capture the snitch, which in the Harry Potter series is a small, golden, flying ball. In this version of Quidditch the snitch is a ball attached to a neutral player. The snitch’s capture scores that team 30 points and the game victory.

“It’s really interesting to watch the different types of seeking because the seeker’s main objective is to grab this tennis ball stuffed into a sock off the back of the person playing the snitch,” Fluke said.

“Usually a lot of players are double or triple threats who can play pretty much any position on the field,” Fluke said. “And those are the people who are really nice to have.”

During the Bowtie Experience Fair on Sept. 2, the Washburn Quidditch Club received 50 sign-ups. Sean Stacey, librarian in Mabee Library, also approached the table and agreed to be the club’s faculty advisor.

“When looking at how to make a team you want to find the people who can be friendly with each other rather than just being the best of the best,” Fluke said.

According to the Title 9 ¾ rule, Quidditch features a four gender maximum per team. This means that four players, excluding the seeker, on the team must identify as the same gender. This gender may or may not be the same as the person’s sex.

“It helps to have a broad appeal to different players,” Hogan said. “You don’t ever want to exclude one type of player because people develop.”

Hogan and Fluke have scheduled their first practice for Wednesday Sept. 9 at 5 p.m. on the lawn outside Memorial Union. The co-captains plan to have the team practice one or two times every week.

“We don’t want anything completely set in stone yet because by limiting the number of practices we have, we can cater to more people’s schedules,” Fluke said.

The club will not have any official cuts regarding players. However, cuts will be applied to the travel team, which will consist of approximately 18 players who will play the away games.

The team will play in a variety of locations including Lawrence, Wichita, Arkansas, Chicago, Iowa, Ohio, Oklahoma, Nebraska and more.

“A huge goal for us would be to go to Regional and show that as a first-year team, we know what we can do,” Fluke said.

“Quidditch has really evolved. It’s not just a bunch of geeks running around on brooms anymore; it’s people who are dedicated to the game,” Fluke said.