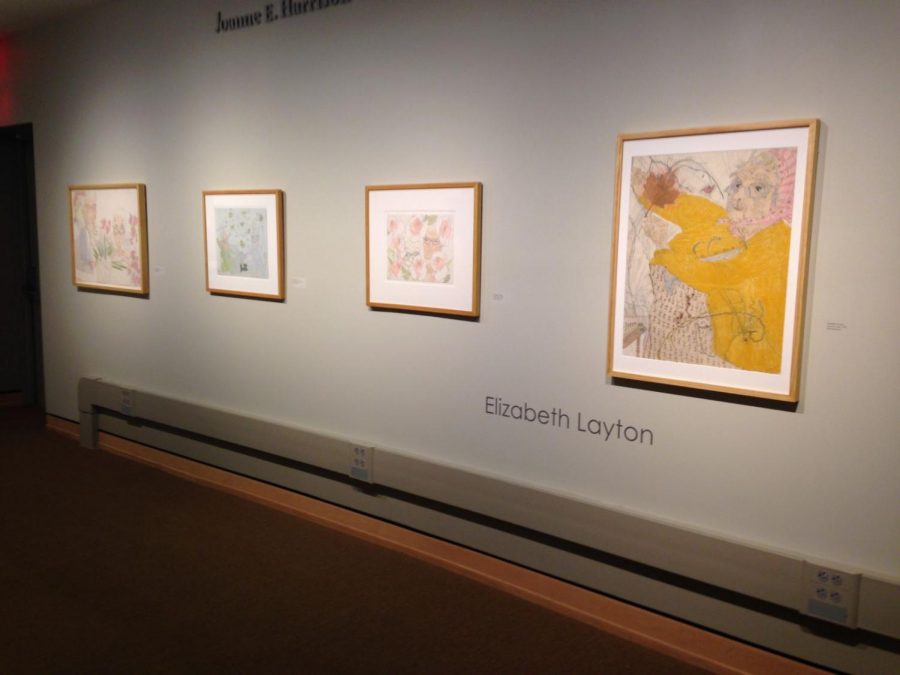 Aging is not something most people give much thought.  We assume it will happen one day and view it as a natural, distant part of life. “Perspectives on Aging,” one of the many excellent exhibitions Mulvane Art Museum has on display right now, puts this forgotten part of our lives into stark focus.

“Perspectives on Aging” is an exhibit featuring the works of Edward Navone, a former Washburn University art professor, and Elizabeth “Grandma” Layton, who didn’t begin drawing until she was 68.

The work of Navone and Layton are quite different from each other.  Stylistically, Layton does contour drawings, which means the artist looks at her subject while drawing and rarely at the drawing itself.  Layton’s art, which features her in one way or another, uses earthy palettes for the most part and appears more cheery and upbeat, although Layton does not shy from depicting harsh realities.

Navone’s art is done in pencil and by memory.  He often will have two versions of the picture, one in black and white, and the other in color, with the color version featuring redder tones.  All of the art in Navone’s suite speak to his father’s battle with Alzheimer’s disease and focuses entirely on the elder Navone.

Layton’s work is extremely impressive considering she did not begin her art career until well into her 60s.  While Layton does not ignore the pitfalls of aging, Layton also takes great care to turn some of the assumptions about aging on their head.  For example, in one drawing, Layton is depicted as saying “How dare you presume I’d rather be young!” and I appreciate Layton taking the time to point out that aging is not the end of the world and can in fact be a great adventure.

Emotionally, however, I found myself drawn more to Navone’s work. Navone’s drawings were extremely sobering and difficult to look at. I found my heart breaking at the depictions of the elder Navone standing in the drawing room of his home looking lost and hopeless, posing by an antique plane or going to the nursing home when he could no longer be cared for at home.

“The fact of the matter is that everybody gets old,” said Julie Myers, curator of the Mulvane Art Museum. “Everybody’s going to face this issue at some -or maybe multiple times- during their life with other people and with themselves.”  Myers went on to share that the exhibit has evoked strong reactions, including tears by one of the employees because her grandfather is struggling with Alzheimer’s disease.

The exhibit is difficult at times, but well worth a visit.  The exhibit is very real and brings to light the good and the bad of aging.

“People experience old age in different ways,” Myers said. “Sometimes it can be an exciting time of life and sometimes it isn’t.”

“Perspectives on Aging” will be on display until Oct. 24.  I strongly encourage people to visit and reflect on the ideas that this exhibit brings forth.