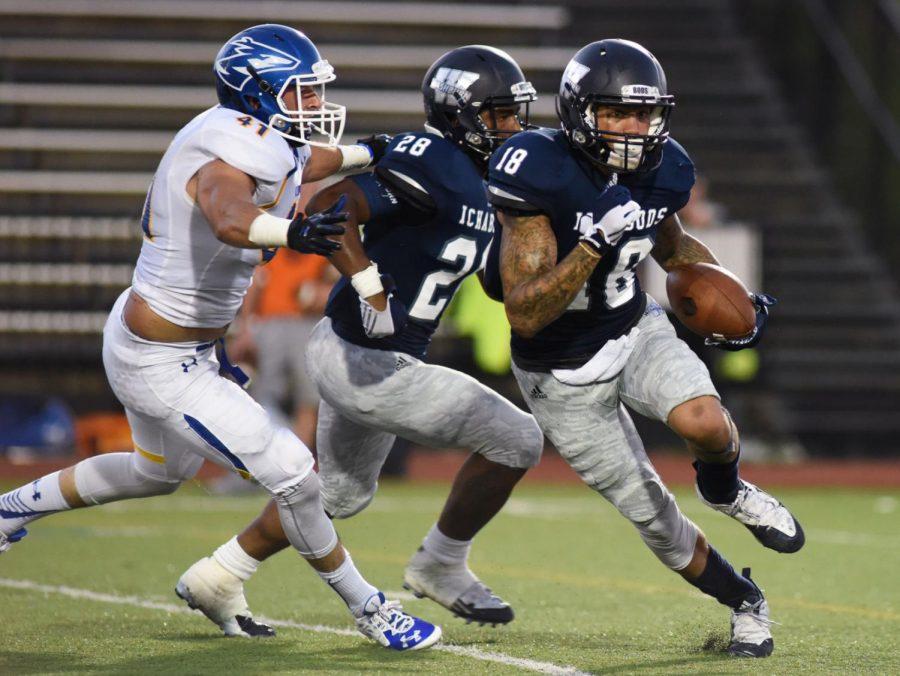 The Ichabods displayed a stellar performance in their Sept. 10 game against Nebraska Kearney.

The game became a two part series due to a heavy rain storm that postponed the game shortly after halftime until Friday at 11 a.m.

The Ichabods started with a phenomenal aerial attack going deep on the first play of the game with a 59 yard bomb from Derek McGinnis to Jordan Hart, giving the Ichabods a 7-0 lead in the first quarter.

The Ichabods handled business by executing their game plan and sticking to it.

In the first half, McGinnis threw for three touchdowns,  utilizing his targets by finding Connor Crimmins in the back of the end zone for a 14-yard touchdown pass advancing the Ichabods to 14-0.

With the Ichabods up by two TDs in the first quarter, the Lopers would find their way into the end zone for six with a 46-yard touchdown pass from Bronson Marsh to Tityus Mitchell making score 14-7.

As the Ichabods returned on the field with just over eight minutes to play in the second quarter, the offense continued to dominate with McGinnis throwing a nine-yard spiral floater to Bryce Chavis in the corner of the end zone giving the Ichabods a comfortable 21-7 lead before halftime.

Right before the heavy downpour stopped the game, red-shirt freshman Duane Simmons gave the Ichabods a tremendous spark on defense.

By intercepting quarterback Mark Bronson, Simmons returned it to the four-yard line, which helped lead the Ichabods to the end zone, making the game 27-7 before the second half.

The night ended early as severe weather flooded the football field, but that wouldn’t stop the Ichabods from applying pressure to the Lopers.

After an 18-yard touchdown run by Bronson, the Ichabods responded with a strong running game.

Brandon Bourbon dove into the end zone for another touchdown,  giving the Bods their first win of the season at 34-14.

With the Ichabods totaling 367 yards in offense and holding their opponent to only 14 points, defensive end Spencer Matthews and wide receiver Jordan Hart were two of the most impactful players.

Hart ended the game with four receptions for 120 yards and Matthews with 11 tackles three tackles for loss and three sacks.

“Last night we knew it was going to be a struggle. We got ourselves mentally ready to come out the next day to turn it up another notch. We weren’t satisfied with the first half, so we wanted to pick up on the things we messed up on to turn out for a better outcome,” said Matthews, Hyvee Player of the Week.

The Ichabods learned that last week’s loss was mainly due to  a  lack of consistency and the ability to get the offense starting off strong early in the game.

“We really felt like last week in the second half we did some good things both running and passing with our tempos. What we were emphasizing was the consistency all the way across the board and making the corrections to our mistakes and coming out and having a fast start to this ball game,” said Jeff Schwinn, offensive coordinator.

The Ichabods will travel to play to the No. 6 Pittsburg State University Gorrilas on Sept. 19 at 7 p.m.

Washburn has yet to defeat Pittsburg since the 2011 regular season game, where the Ichabods won a 43-22. They then lost in the second round of the NCAA playoffs to a final score of 22-31.

The Ichabods will return home on Sept. 26 to play Missouri Southern Lions on family day at 1 p.m.