Senior citizens fight for their rights in ‘Old People’ 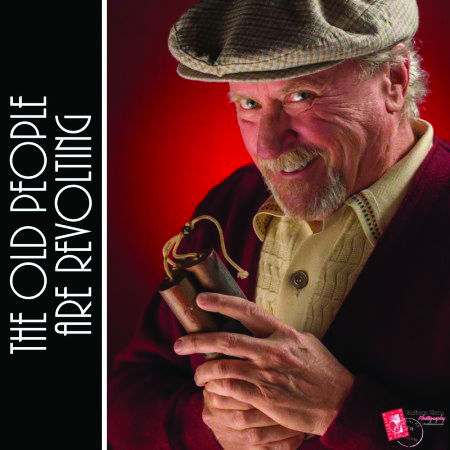 The latest production to come from Helen Hocker Theater is a bit like “Hogan’s Heroes.” Except set in a retirement village.

“The Old People are Revolting” portrays a group of senior citizens as they fight for their rights and generally try to stick it to the young people who have pushed them aside.

It all starts when the members of a retirement village, a motley crew of seniors, find out their discounted utilities have been taken away by their city counsel. Rather than starting a petition, they take matters into their own hands and hijinks ensue.

Particularly enjoyable were the well written and ably performed supporting cast for this play.

The character of Peggy, a soft spoken crochet enthusiast, played by Penni Hansen, had some real comedy chops. Hers was a character that could have been overshadowed by more exotic personalities. But, Hansen committed and came across as anyone’s grandma going along in a crazy scheme throwing zingers from time to time. In short: very funny.

The trio’s chemistry was reminiscent of “The Golden Girls.” Lambrecht playing a sober-minded intellectual, Hansen a sweet widow, and Bisel a lady still looking for love late in life.

Other notable performaces were from Doug, played by Marc Rapp, and Elizabeth, played by Carole Ries.

Rapp’s character was unexpectedly funny after his initially stern appearance. Thrilled to be doing anything at all in his stagnant retirement, he drove the plot forward and really personified an adventurous senior.

Ries similarly transformed in the second act from a pitiable, forgetful lady to a source of inspiration for her fellow seniors. In the process giving some unexpected, very eloquent monologues.

Of the technical theater work done with this show the soundtrack, full of protest songs of yesteryear, and the costumes really added personality to the scenes.

The biggest fault of this play to me is the dynamic between the character of Patricia and Howie, played by Bruce Smith, presented. Their relationship was the largest subplot to underlie the story of the seniors’ revolution and it just was not particularly engaging to me.

Though Smith committed to his crass, immature character and Lambrecht matched it with a portrayal of a cross, no nonsense woman, the story of their relationship changing was not developed well and did not have enough good laughs in there to make up for it.

That being said, I must appreciate that Helen Hocker is geared toward more family friendly shows and that the jokes that fell flat for me may be hilarious to younger audiences.

Perhaps more important than any of this is the fact that this show gives regular theater goers something they rarely see. The fact of the matter is, young people make up a good portion, if not majority, of the actors most of us who watch armature theater see, be it school or community.

This in and of itself is not inherently bad. It is refreshing, though, to see older actors in the spotlight in such unconventional roles as lovers, fighters and revolutionaries.

“The Old People are Revolting” will be shown at 8 p.m. on Fridays and Saturdays, and at 2 p.m. on Sundays until Oct. 4 at Helen Hocker Theater in Gage Park. Tickets are 13 dollars for adults and can be found at www.topekacivictheatre.com or by calling (785) 251-5990.