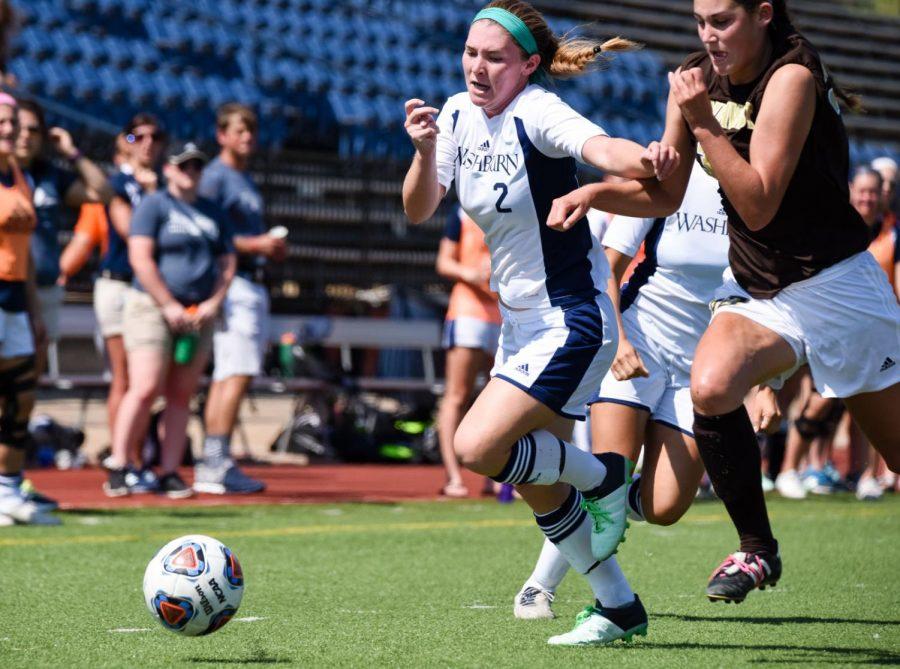 The sunny weather promised perfect weather for a soccer game, but with temperatures reaching 95 degrees Fahrenheit, constant substitutions were needed. Most players, however, remained hydrated, cycling in and out of the game.

Despite the game being a tie, Washburn played offensively throughout the game. The Ichabod’s forwards, freshman Paige Swanson, freshman Whitney Skinner and senior Bailey Wobig, substituted frequently and kept the team on the offensive.

Freshman Whitney Skinner stayed in for the entirety of the first half as well as the majority of the second half, having 67 minutes of play time, excluding overtime.

The game went into double overtime, which happens if the two teams are tied at the end of the first two 45 minute periods. Overtime lasts for 10 minutes, in which the first team to score wins. If both teams fail to score during this second overtime period, the game continues into penalty kicks which determines the result of the game.

This match was the team’s second match this season. After losing Thursday to Minot State, the Ichabod’s record is now 0-1-1. The team’s coach, Chris Jones, remains hopeful.

“Between Thursday’s game and today’s game, we’re getting better. Those mistakes in Thursday’s game we corrected on Saturday in practice, and it showed,” said Jones. “Number 20 from Southwest Minnesota State is very very dangerous, and we corrected that and basically eliminated her from the game. She had a couple of opportunities for breakdowns but that’s just going to happen.”

A lot of strategy went into the game, but with the game likely being the hottest one of the season, it’s difficult for Jones to see fault in the tie.