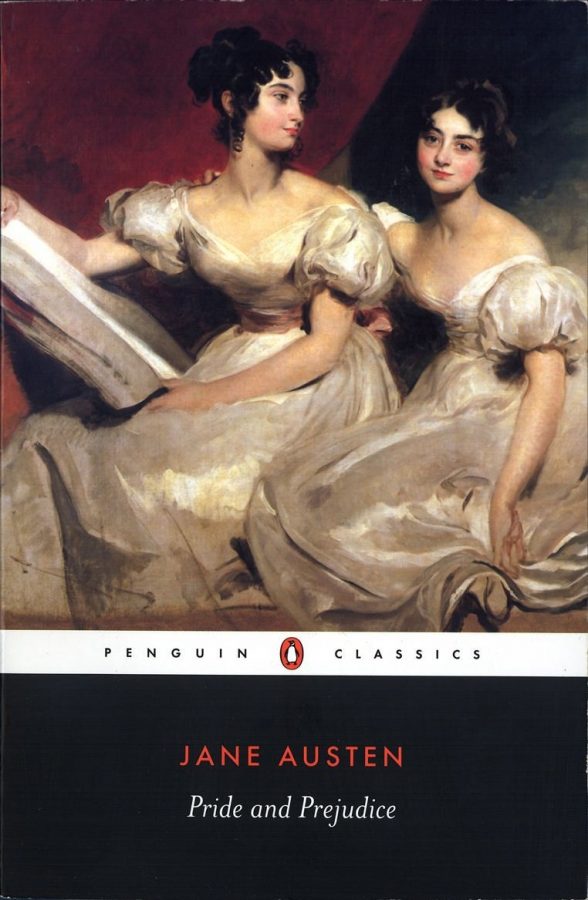 Who doesn’t love a little British romance? “Pride and Prejudice,” Jane Austen’s most famous novel, is a delight and a half.

Set in 19th century England, Mrs. Bennet wants nothing more than to marry her five daughters off as quickly as possible. The story focuses on Elizabeth, the second oldest daughter, who would rather read all day than pursue men, much to her family’s dismay. When Mr. Darcy and Mr. Bingley, two rich, refined bachelors, rent an estate in town for the summer, the Bennet sisters’ love lives are thrown for a loop.

This is my favorite romantic comedy of all time, novel or film (the 2005 film adaptation featuring Keira Knightley is outstanding, for the record). The writing in this novel was hilarious. It was written dryly, there aren’t a lot of blatant jokes or snappy one-liners, but the characters themselves and the awkward situations they continuously find themselves in are the stuff comedy dreams are made of. There is so much drama packed into the story, but it was never over the top and balanced out nicely with commentary on social class, manners, feminism and morality.

Elizabeth is smart, she is very level-headed and loyal to her older sister Jane. Her smart mouth and fierce independence don’t quite mesh with the time period’s standards for women, so she often gets herself into trouble for speaking her mind brashly, particularly in calling Mr. Darcy out on his douchey behavior. Suffice it to say I loved her.

Mr. Darcy, our leading man, was the most charming jerk I have read to date. Initially, he was cold, snobbish and often sarcastic, which made for some great arguments between he and Elizabeth. As the story goes on, he began to develop feelings for her, though, and opened up emotionally to her, which was unbelievably satisfying character development to watch unfold.

Our cast of supporting characters were a lot of fun, Mr. and Mrs. Bennet in particular. He was unflappably calm and arguably the only totally sane person in the family, while Mrs. Bennet was 31 flavors of crazy, but it was always well-intentioned. However, one of my only two complaints stemmed from the supporting characters. The cast is massive, and it can be overwhelming to have to keep dozens of characters and the names of their estates straight. Once you get into the writing style, though, you quickly suss out who is and isn’t worth remembering and can coast through the rest of the novel.

My other complaint is in regards to a letter sent in the second half of the story. I won’t say who it was from or what it said because you will want that shock factor. While the letter was great and fueled the drama for the remainder of the novel, it felt out of the blue and pretty out of character from the person who sent it. I can only suspend my disbelief so much, after all.

All things considered, “Pride and Prejudice” is a near masterpiece in my book. The fact that I had to nitpick to find anything I didn’t like about it should speak for itself. It’s full of familial drama, awkward comedy and swoon-worthy romance, and Elizabeth and Mr. Darcy, our two leads, are the bickering couple you can’t help but love and root for. Take a chance on this old English classic, you won’t be disappointed.