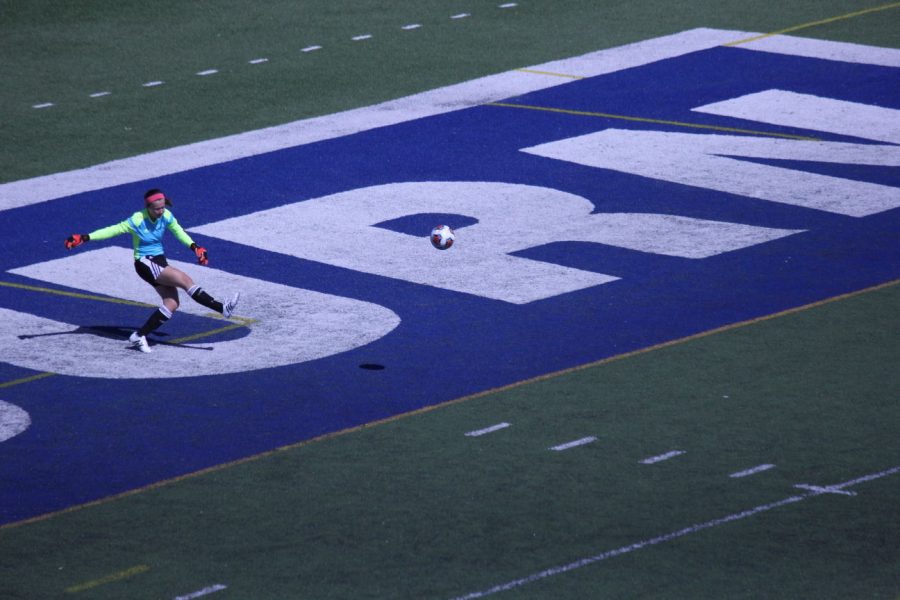 Getting it out of the area: Washburn keeper, #1, Kaitlin Minnich, defends the goal from the Nebraska Kearney offense. In this photo, Minnich bunts the ball out of the goal box to her waiting team down the field.

On Sunday, September 20, Washburn Soccer ended their streak of 27 winless games with a 3-1 win against Nebraska-Kearney, marking the first victory of the season as well as the first win with the new head coach.

The game started out with an almost record intensity, with Kearney earning themselves six fouls to Washburn’s one in the first 10 minutes. This led up to Kearney earning 19 fouls within the first half, threatening to break the record of any Washburn visiting team fouls which is 24.

However, Kearney cooled down by the second half, having already earned two yellow cards in the first half, and so they didn’t break the record. By the end of the game, Washburn had also earned two yellows: one on Bailey Wobig, and the other on Sara Specht.

The first goal was a header by Emily Stauffer, assisted by Morgan ElAttrache, just 16 minutes into the game. The second was a minute and a half before half time and was scored by Michelle Keleher, assisted by  Cadence Bourne.

“I felt that we dominated the game from start to finish,” Coach Chris Jones had to say about the game, which followed the two consecutive losses that Washburn had this week against Newman and Emporia.

“Our energy and our mood even in warm ups was excellent. The difference between games was we addressed all the frustrations they [the team] was dealing with and letting them know that they don’t need to put all this pressure on themselves and we just need to go out and enjoy playing the game.”

In soccer, fouls can vary severely in degree, only the harshest of which get yellow or red cards. The others usually have to settle for a free kick by the opposing team. In Sunday’s case, Washburn had plenty of opportunities for free kicks, but the team got pretty roughed up in the process. Some of Washburn’s players even seemed targeted, such as Ellie Karloff.

“The girls just kept playing hard and not letting the fouls get to them. It helped us on the second goal and I told them that if they are going to foul you, we need to take advantage of it,” Jones said.

The game ended on a positive note, Washburn winning 3-1 and moving on to prepare for their game against Linwood University this Friday. Coach Jones left this message for the students of Washburn:

“Keep coming to the games and being loud! We have had great crowds thus far and keep supporting us. This isn’t the last win of the season, only the first.”