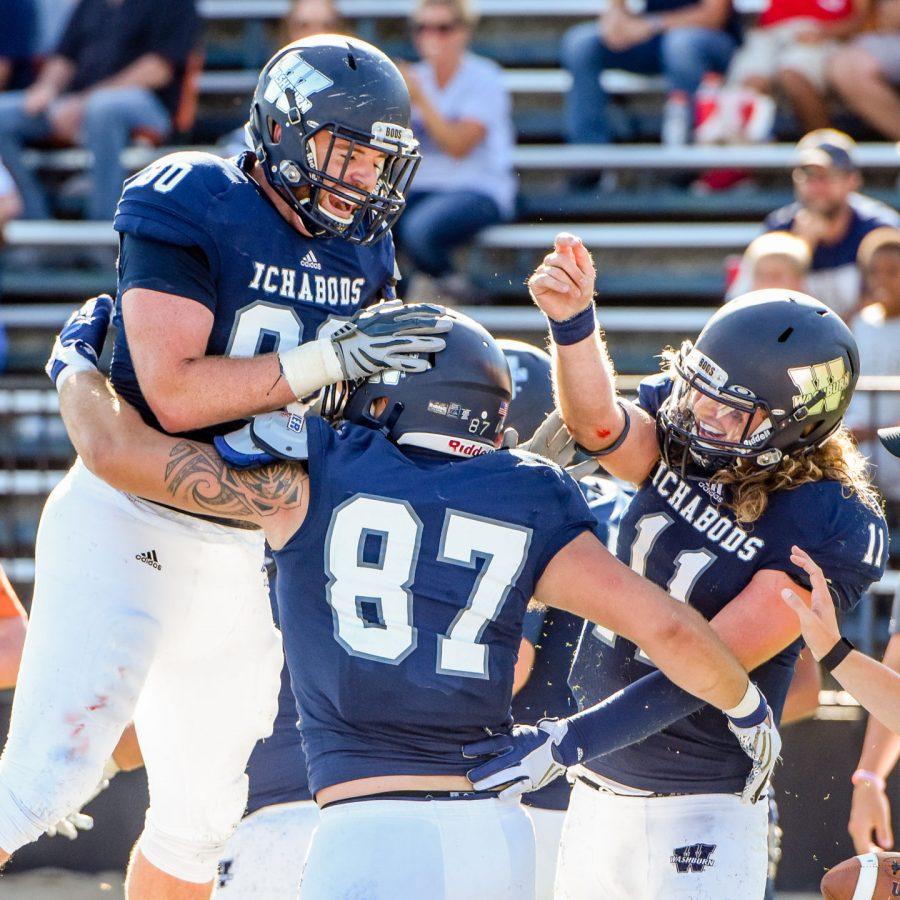 Luke Yoder, Adam Luthi, and Derek McGinnis celebrate in the end zone after a successful two-point conversion against Missouri Southern.

The Washburn Ichabods made a comeback against Missouri Southern State University in the fourth quarter, pulling out a 27-21 win on Sept. 26.

Last year, the Ichabods started the season 1-3. This year, they reversed the record starting off at 3-1, playing great on both sides of the ball.

This weekend’s game against Missouri Southern showed that they were able to score in clutch moments and play a lock-down defense .

With the Ichabods trailing in the last quarter 21-13, they would score 14 unanswered points with 3:44 to win the game.

The Ichabods started the comeback drive on their own 25-yard line and scoring on a four play, 75- yard possession.

Quarterback Derek McGinnis collaborated with Bryce Chavis for a 63-yard bomb, placing the Ichabods on their own 3-yard line. Feeding Hayden Groves the ball after the play, the Ichabods took it in for a touchdown, reducing the score 21-19 after a failed extra point.

After forcing the Lions to a three-and-out, the Ichabods took over at the Lions 45-yard line. Struggling to move the ball, they converted a first down on a clutch fourth and one, allowing Brandon Bourbon to dive over both the offensive and defensive lines with the ball for a pair of downs

The Ichabods would take a big shot downfield completing a 29-yard pass from Derek McGinnis to Anthony Daniels putting the Ichabods on the Lions 5-yard line.

With 1:16 left on the clock, Derek McGinnis completed a 5-yard touchdown play action pass to Chad Williams giving the Washburn a 27-21 lead.

With the Lions taking over at their 25-yard line, they would respond aggressively with a 36-yard pass from TJ Fleeton to Jordan Morrison placing the Lions at the WU 9-yard line.

With 15 seconds left on the clock, Washburn junior cornerback Zack Franklin broke up a pass that sealed the deal for the Ichabods advancing them to 3-1 for the season.

Franklin broke up two passes in 15 seconds that helped lead the team to victory. “I felt confident in my technique. I knew how they [would] try to beat me and it just didn’t work,” said Franklin. The Ichabods opened the game with a solid passing attack allowing them to have an early lead on the Lions.

On the first offensive possession Derek McGinnis finds Bryce Chavis open on a slant route for 39 yards running his way into the end zone, the drive went for 6 plays in 67 yards.

“We have an big rivalry game next week. I’m looking forward to see how the guys are going to play and how much intensity they are going to come out with because they are a pretty good team,” said assistant coach and defensive backs coach LaRon Moore.

“But we need to polish up on doing our assignments and not having a mental bust. I think we are unstoppable team when we don’t have mental bust.”

The Ichabods will travel to Fort Hays State University to play the Tigers for their homecoming on Saturday, Oct. 3 at 7.p.m. The Ichabods will face former defensive coordinator Cooper Harris who spent ten seasons at Washburn.