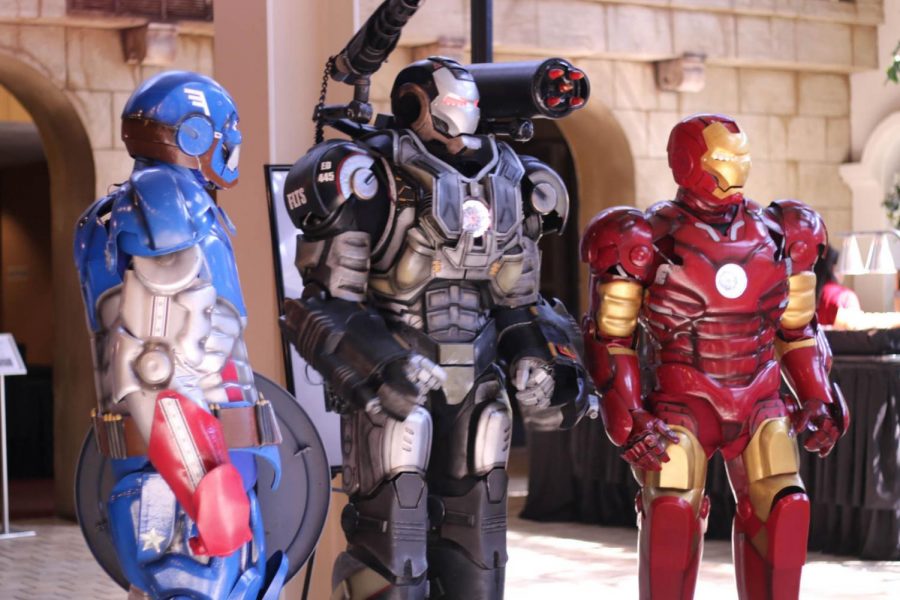 TOPCON 2015 brought cosplay, exhibits, artists, performers and gaming back to Topeka for its second year from Sept. 18 to 20 at the Ramada Inn.

Events and performances were held for the crowd to enjoy throughout the day, including meet-ups with groups of cosplayers, seminars on writing and comics, and a battle of wits between Star Trek and Star Wars villains.

“It all started as a small group wanting to trade and get together,” said Jim “Gypsy” George the Executive Director at TOPCON, “We only had a small room at the Ramada, and 731 people ended up showing up. This year we have estimated about 1,800 will show up.”

This large crowd drew in many vendors and cosplayers around Kansas to participate in this event and present their work.

Cosplay groups like Iron Brothers of Topeka, 501st Legion, Ultra Girls Cosplay, Zombie Response Team: Topeka, Alexa Heart, The KC Ironman and the work of Eric Collins made an appearance to pose for pictures and show off costume designs.

The Iron Brothers of Topeka could be seen walking around in costume, including fully made suits of armor for characters like Iron Man. Eric Collin’s Red Dalek costume could be seen as he roused the audience before a cosplay contest.

“This year I will be going as KCIronman, Batman and either Boba Fett or Iron Man,” said Clay Hielscher, a part of the IBOT team, “I have a couple of costumes prepared for the event.”

Hielscher said that a great part of any con is the use of panels. Panels are events where a debate may be held or an interested person may gather information on costume making. It can be helpful to cosplayers wanting a cheaper and easier route when making their costumes.

TOPCON offered many panels including seminars on ways to build a cosplay costume, writing tactics when creating a comic and discussing topics like gender in gaming or bridging the gap between The Gaming Generation and their parents.

“Topcon reaches several different gaming generations and puts them together in one place and it’s just a fun time,” said Reuben Juarez, promotional representative at BioCustom Consoles, “This year’s TOPCON will have lots to do from meet and greets, to cosplay, board and video gaming, tons of great vendors, panels, and so much more.”

Juarez said that he became part of the TOPCON team after chatting with some of its leaders. He then went on to help host Afterglow, a gaming event that takes place the first Friday of every month. With its mix of gaming and illustration it gives artists and vendors a chance to display their work.

One booth, Warp Zone Retroplex, challenged gamers to beat high scores and win prizes. Older consoles like the NES were setup to test gamers skills in Super Mario, Duck Hunt, Contra and Smash TV games. High scores were displayed with the gamers name to challenge the next gamer that took on the game.

Rock Bottom Works featured the art of Joshua Cochran, including his custom design shoes and large canvas pieces. Designs included superhero portraits and logos, and two canvas portraits of V for Vendetta and the Joker done solely in sharpie.

Vendors could be seen lining “Artist Alley”, selling handmade items and drawings. Handmade jewelry, costume pieces including helmets and corsets, figurines and stuffed animals, and wood design were a few of the featured works.

TOPCON 2015 brought together a community of gamers, cosplayers and artists to participate in gaming, contests and workshops. It offers a venue for vendors, art and games to come to together.