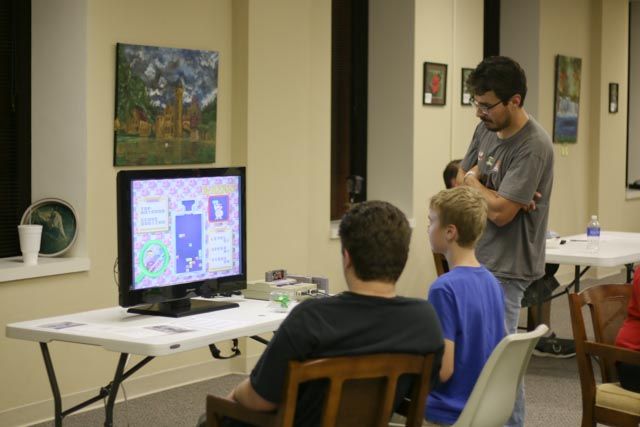 Michael Hernansez from Warp Zone Retroplex lets gamers try out his systems and take on challenges.

Friday, Sept. 4, TOPCON hosted “Afterglow,” a gaming tournament that gave participants a chance to partake in cosplay, snacks, prizes and exclusive merchandise from vendors. The main tournament for this first event was Super Smash Bros on the Wii U, and gamers were encouraged to bring their own controllers to compete with. Game systems were also welcome to set up for free play.

The top prize for first place this weekend included a three day pass to the upcoming TOPCON Geek Expo 2015, and second place earned a one day pass. Participants all received a ticket for various door prizes, including gaming merchandise and t-shirts.

“In my understanding, video games seem to be the common denominator that brings a lot of people together,” said Reuben Juarez, Promotional Representative at Biocustom Consoles. “We started with a handful of people and then gradually grew into about 40 to 50 people. We’re all here and having fun, that’s all that matters.”

Juarez said that Afterglow started back in May 2015, and has only continued to grow over time though it hasn’t been running long all that long. He said he has been a part of the team for two months now, and that vendor and artist presence have increased at the events.

Afterglow is always held in the Quincy Street Conference and Event Center in Suite 300. The suite provides different rooms with themes to participants, including a retro game room, art galleries and a shop to purchase concessions.

Multiple gaming systems were set up for participants to use freely, including a Nintendo 64, NES with Mario Party, Mario Kart, Teenage Mutant Ninja Turtles, Mortal Kombat and more. Other stations had newer Playstation and XBox consoles for players.

Three vendors came out to sell merchandise and show off original work, including Biocustom Consoles, Video Game Perlers and Warp Zone Retroplex. Two art galleries were set up to show the work of various artists including Jim “Gypsy” George, D. Koy and other local Topeka artists.

“My favorite thing about Afterglow is the crowd, and just getting to meet all the different people involved,” said Michael Hernandez, representor for the Warp Zone Retroplex. “It’s all about playing games with people.”

Hernandez said his goal is to set up at TOPCON Geek Expo 2015 to provide games and challenges to anyone that wants to partake. He sets his consoles up for free at Afterglow to give users a chance to reacquaint with older gaming favorites, such as Super Mario and Duck Hunt.

“This is our third time at Afterglow, I love the atmosphere here,” said Jeff Nasser, representative of Biocustom Consoles. “It’s kid friendly and everyone can enjoy each others company.”

Afterglow is a supporting event to TOPCON Geek Expo, where participants are welcome to get involved by becoming vendors, cosplaying, bringing and using consoles and entering into the main tournament. Afterglow will continue to run the first Friday of each month until the end of the year, the remaining dates being Oct. 2, Nov. 6 and Dec.