Movie Review: “A Walk in the Woods” charms old and young 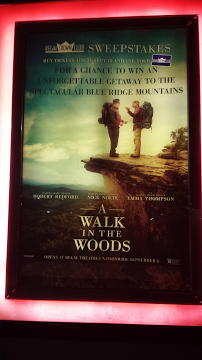 “A Walk in the Woods” is a great movie to see with your grandma, and that is not a bad thing.

The film follows the once prominent travel writer and now comfortable grandfather Bill Bryson (Robert Redford) on his quest to hike the Appalachian Trail across the present day Eastern U.S.A. He is joined by estranged friend Stephen Katz (Nick Nolte) and comedy, drama and life lessons ensue.

Redford and Nolte played a reserved everyman and his gruff friend well, respectively. Though Nolte stole a few scenes with his complete embodiment of the character, Redford truly held his own and I cannot think of a better voice for the role. He brought his personal passions, namely environment conservation, into his character as well.

The supporting cast also pulled their weight. Notably, Emma Thompson, portraying Mrs. Bryson, played the role of a worried wife with some pluck. Kristen Schaal also did well in her all too brief appearance as the know it all, chattering, croc wearing, Mary Ellen.

I found the movie’s humor rather refreshing. Instead of being crass for the delight of being crass or wholly based in pop culture, the funniest moments came from good character acting.

Moreover, the comedy seemed in line with the movie’s very American tone and poked fun at our love of pretty people overcoming obstacles but never really looking ugly doing it.

I also admire the writer’s avoidance of played out sources of drama. Redford’s character is given an opportunity to cheat on his wife but does not. Similarly, Nolte’s character is a sober alcoholic who carries a bottle of whiskey but who never intends to drink it.

In this way the plot stays in line with the characters and makes the characters more complex, rather than creating drama by shocking the audience with an unseen, dark aspect of them.

There is liberal use of overhead shots of the duo walking through beautiful landscapes with cuts to shots of kudzu covered overpasses and super K-Marts.

I found this a nice balance between giving two old guys a “Lord of the Rings” quest moment and staying honest to how America looks.

Admittedly, this film is not action packed and is not likely to make a twenty something burst with laughter. There are several clunky scenes of forced dialogue between Redford and Nolte I would cut completely in editing this movie. I also felt the tension between the two could have come to more of a climax.

That being said, it does present themes that are not explored often enough.

Ours is a culture that glorifies youth. But, this film reminds us that youth is short lived in one’s life while the need to test your limits, seek adventure and mend friendships are as vital and valid to retirees as to young heroes.

It should also be noted that when seeing the movie in theatres the audience is likely to be of a more advanced age.

Therefore, one can expect the following: Audience members arriving on time, only tasteful, moderate public displays of affection and a lack of cellular phones glaring and ringing during the movie.

All this considered, this movie proved charming and full of believable interactions. Though its plot is not the most dynamic, it has a refreshing portrayal of friendship and adventure among the older, dare I say a bit wiser, among us.