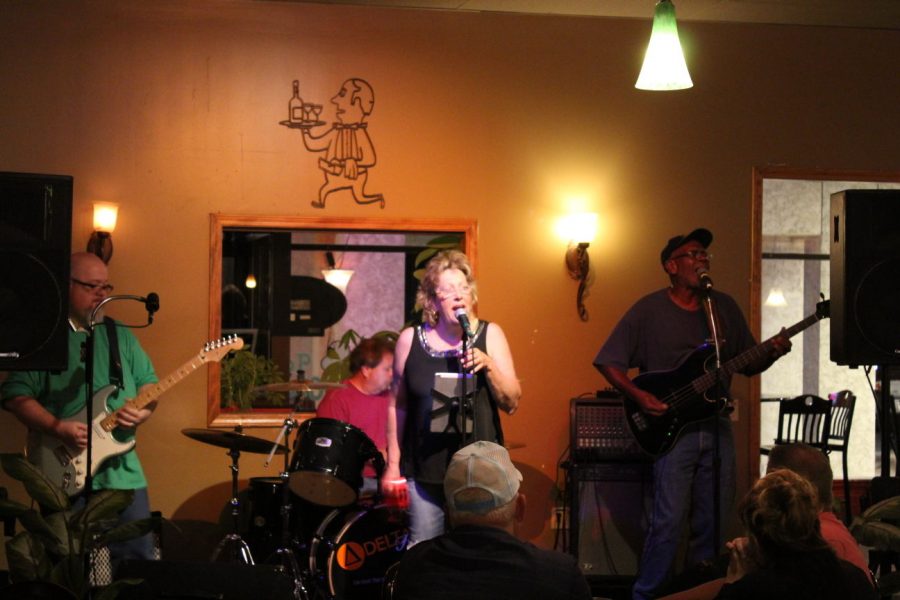 Live at the Classic Bean: Blues-classic rock fusion group Delta Haze performed covers of various songs such as "Listen to the Music" by The Doobie Brothers.

The Classic Bean is one of Topeka’s best underground hotspots, especially on Friday and Saturday nights at 8 p.m.

The Classic Bean is a local coffee shop chain, with three locations in the downtown area off of 7th Street and Kansas Avenue, Fairlawn Plaza off of 21st St., and by 29th St. and Urish Road. Of the three locations, the shop on Fairlawn Plaza is host to a music night from 8 p.m. to 11 p.m. on Fridays and Saturdays, spanning a wide variety of local bands.

“There are various genres, a lot of it is classic rock. They have a decent amount of bluegrass coming around. I found one of my favorite groups, Past Tense, here,” said Carlos Serrano, a long-time attendee of the Classic Bean’s music night.

Aside from classic rock and bluegrass, blues and folk bands are also a common arrival at the Classic Bean, as well as various singer/songwriters.

“I’m fond of it. I like that they get a lot of local groups. Sometimes it’s kind of Joe Schmoe with his guitar, but most of the time it’s fairly professional groups and I like that a lot,” Serrano said.

Serrano also said that it was not just visiting the Classic Bean’s for the music he loved, but also the customer service.

“Most of them know my order. I walk in and they say ‘Hey, Americano?’ and I go ‘Yeah’,” Serrano said.

The Classic Bean was host to bands such as the country-rock group WynRich Trio on Sept. 12 and blues-rock fusion group Delta Haze on Sept. 19. Nick Burchett, the guitarist for Delta Haze, expressed great satisfaction with the Classic Bean’s audience and environment.

“It’s a good place to play. It’s low-key and the crowd seems to be pretty receptive,” Burchett said.

Burchett also said that he and the other members of Delta Haze have played at the Classic Bean previously.

“We played here about a month ago,” Burchett said.

Aside from its music nights, the Classic Bean also has a monthly art display, though at the time of this publication the online calendar for the artists listed was not up to date.

Ichabods interested in grabbing a quick cup of coffee and listening to some local music should head on down to the Classic Bean on Fridays and Saturdays at 8 pm. Performances for the rest of September include bluegrass and folk musician Lee Muller on Friday, Sept. 25., and rock band NOVY on Saturday, Sept. 26. The Classic Bean is also open to scheduling local bands interested in performing.