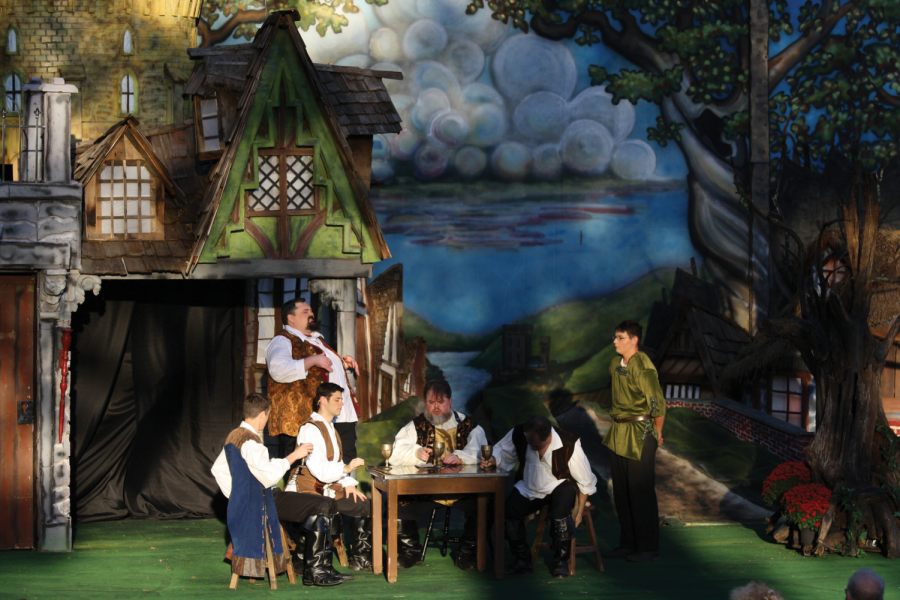 Falstaff and his court make plans for him to woo the merry wives. 'The Merry Wives of Windsor' was presented in the Flint Hills Shakespeare Festival.

Set near the town of St. Marys in a place named Sir Williams Hollow, The Flint Hills Shakespeare Festival was a quaint assortment of handmade shacks housing artisans, a jeweler, a baker and, in fact, a candlestick maker.

I thoroughly enjoyed roaming the booths around the festival but the main attraction was definitely their production of “The Merry Wives of Windsor.” The show was performed in an outdoor theatre so if you go I’d suggest bringing a blanket or lawn chair to sit on.

There were some downsides that come with outdoor performances, mainly weather and some technical difficulties with the microphones. But other than those issues the show was fantastic. The actors, community members and three participants from Topeka all performed with enthusiasm and professionalism. You can do Shakespeare or you can do Shakespeare right, and I truly think they hit the mark with this production. On top of the exemplary work by the cast, the crew impressed as well; the set and costumes were stunning and incredibly well made.

Shakespearian verse can be pretty difficult to follow along with but within one or two scenes I caught on. The actors did a fine job of translating the verse with their pitch and intonation; even if I did not always understand the terminology, the intention was clear. The festival directors were also kind enough to include an extensive synopsis in the back of the playbook to keep people up to speed with the fast paced, comedic romp.

The other pleasant aspect of the festival was the price tag, at only eight dollars per person or five dollars per person in a family, I was able to enjoy well-done Shakespeare at a very affordable cost. The members of the St. Marys community clearly care about this festival and have put their hearts and souls into the event and it shows in the results. I highly recommend this festival to Shakespeare lovers and theatre newbies alike.

The festival will run this weekend Sept. 17 to 20. The festival gates open at 5 p.m. each day. Performances begin at 7:30 p.m. Thursday and Friday, and at 6:30 p.m. on Sundays. On Thursday, Sept. 17, there is no festival, but only the play. The festival entrance is located on the south side of 28139 Mt. Calvary Rd, St. Marys, KS 66536. For more information visit flinthillsshakespearefestival.com.