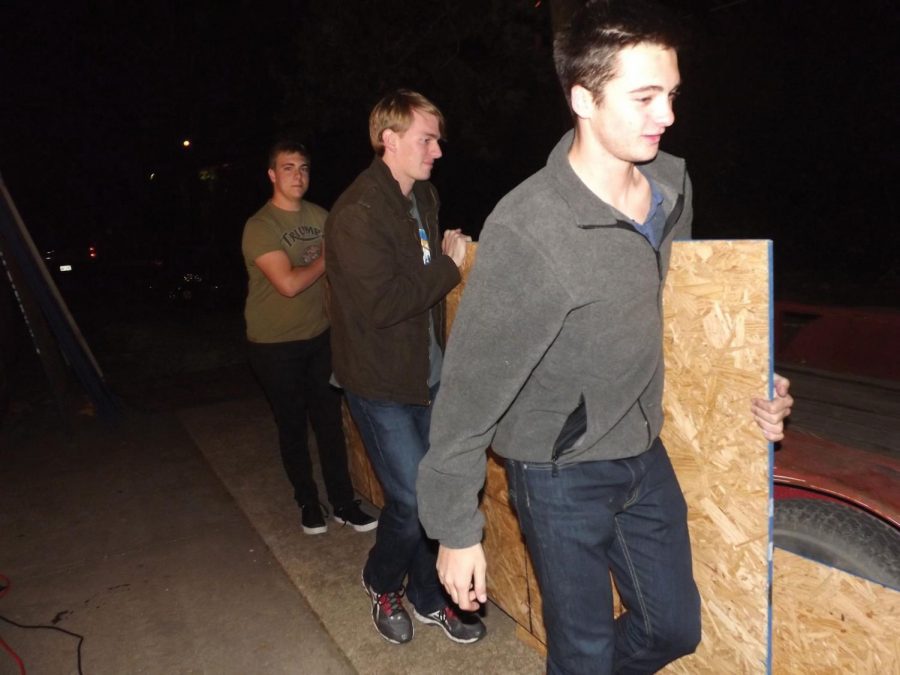 Homecoming is a Washburn event that connects alumni, faculty and students alike. Clubs and organizations are in a rush to get their decorations, floats and banners finished on time to show their school spirit.

This weekend, Alpha Phi and Phi Delta Theta came together at Sigma Phi Epsilon to perfect their homecoming float. Their float is is centered around the 1980s, so they chose to decorate with a video game theme.

Skyler Urban, Trevor Bollinger and Ian McClain of Sigma Phi Epsilon, and Morgan Hammes and Jordan Guion of Alpha Phi said that homecoming focuses on tradition and the rich culture that Washburn has always offered.

Bollinger expressed that it is important to remember the history of Washburn, especially during the Grand Homecoming celebrating Washburn’s 150th year.

Hammes described how homecoming has brought them together as a team for the parade project.

“We have learned how to best manage the time we have until homecoming and how to build projects together,” Hammes said. “Two fraternities and a sorority are all working together and contributing very equally to get this float finished and looking great.”

Each individual fraternity and sorority do their own top hat, banner and door decorations. The fraternities and sororities pair up in a rotation for the float and Yell Like Hell.

“We have been practicing twice a week for about a month now to get this done. We are excited for everyone to see the final result,” Hammes said.

Student organizations take the event very seriously, while still having plenty of fun.

“We really try to incorporate and motivate the people who aren’t participating to still be there to show their support,” Guion said. “Alpha Phi is very big on attendance and it is great to see everyone there. There is at least something that everyone can get involved in and it’s a great chance for character building.”

Hammes described that this is a special week to show school spirit by getting involved.

“Homecoming is a good chance to show school spirit while having a great time doing it,” Hammes said. “So get involved with an organization on campus and make sure that you show your support for Washburn.”