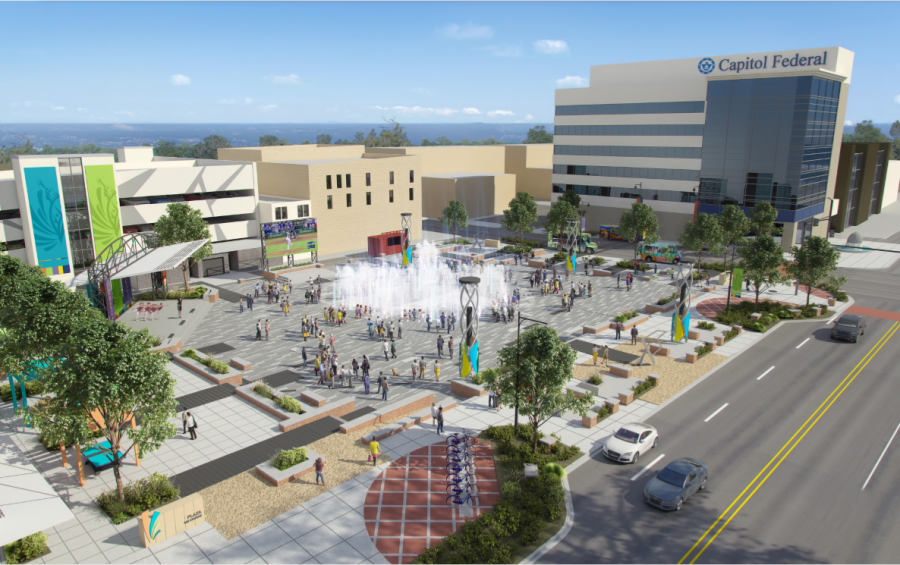 Downtown hotspot: Kick off the summer at Evergy Plaza in Downtown Topeka. Food and entertainment can be found here regularly during the summer.

Downtown Topeka will an upgrade in the form of the Evergy Plaza, located at the corner of 7th and Kansas Avenue, which is set to open April 29 at 10 a.m. This massive project is part of Topeka’s ongoing efforts to renovate the downtown area and make it more attractive to the local community as well as guests from afar.

Evergy, which is the product of a merger between Kansas City Power and Light Company and Westar, partnered with Capitol Federal, the Topeka Lodging Association, the Greater Topeka Partnership and others to get this project off the ground. The original plaza project was announced in the summer of 2018 with groundbreaking taking place in early 2019.

“Wesstar Energy was connected to the downtown area so we’re excited to support it,” said Andrew Baker, Senior Communication Specialist with Evergy. “This is the first major gift of Evergy to Topeka. We’re really excited to be in the heart of Topeka’s downtown development.”

Both Evergy and Capitol Federal pledged $2.5M apiece for the plaza with the Topeka Lodging Association pledging $500,000 for the next ten years to cover maintenance costs. Evergy Plaza is owned by the Downtown Topeka Foundation and managed by Spectra Venue Management.

“Consultants have come to Topeka over the years who have said that our community could use a plaza, a gathering spot, somewhere downtown,” said Vince Frye, Senior Vice-President with Downtown Topeka Inc. “Many said that the appropriate place was 7th and Kansas. We looked at over a dozen locations in downtown Topeka but ultimately decided on the current location.”

The plaza is described as the ideal connecting spot in the heart of downtown Topeka, a description that hits the mark when looking at the features being included in the undertaking.

“This will be a gathering spot for the entire community,” said Frye. “A 50-foot performance stage will provide music while a video board can be used for people to watch games and movies. There will be ice skating in the winter, the only thing we would have to charge for. A fire pit will help keep people warm in the winter months. The most spectacular thing is a fountain which will hold a display every evening. It can also double as a splash park, a place for families to go during the summer.”

The new plaza is expected to draw thousands of guests during its opening ceremony in April and continue to draw guests from abroad in the years to come. The plaza will have a positive impact on the downtown area as it will also bring financial incentives that will attract new businesses to the area while also boosting the notoriety of the businesses already located there.

A host of live performances are expected to take place at the plaza; it will be programmed for performances 250 days of the year so that there will almost always be something happening downtown.

While the plaza is set to officially open in April, the date could be pushed back due to the recent viral outbreak. However the planners of the project hope to keep their current opening date for the time being.

For more information on the plaza and the variety of exciting events that it will house, please visit https://downtowntopekaplaza.com/.