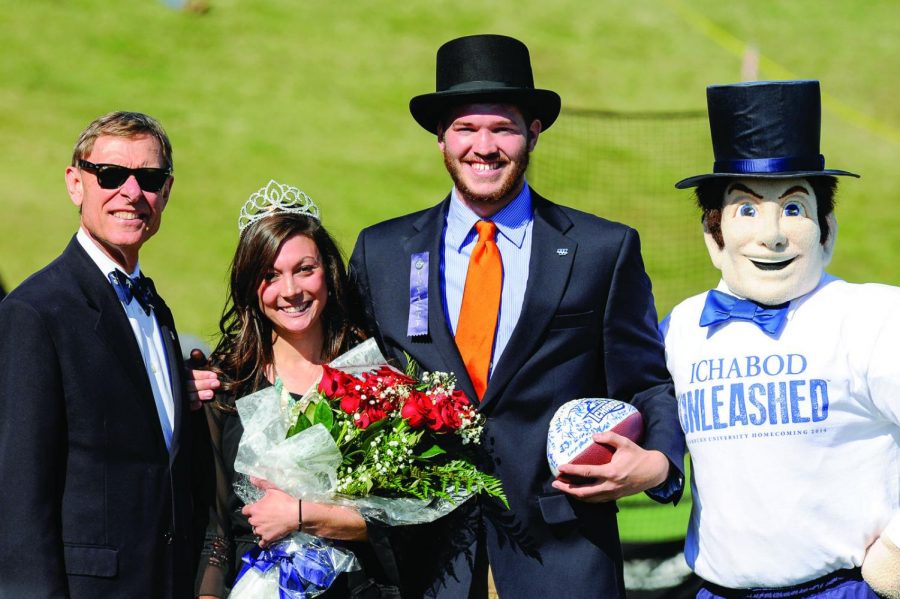 At halftime of Washburn’s homecoming game against Missouri Western, Carley Willis and Alex Crume were announced this year’s homecoming king and queen.

“I was extremely surprised and humbled,” said Willis. “The first thing I did when they announced my name was hug my mom and dad. Mom was pumped.”

Willis, a senior mass media major with emphasis in contemporary journalism, was nominated by her sorority, Zeta Tau Alpha. The nomination was as much of a surprise as winning the crown.

“There were so many other women in the sorority they could have nominated,” said Willis. “I wasn’t able to attend the meeting when they nominated me and I was kind of shocked when I got a text with the news later that night.”

Crume, who was also nominated by Zeta house, was just as surprised as Willis to hear he had won.

“It was really exciting and humbling,” said Crume. “I wasn’t really expecting to win.”

For Willis, being crowned homecoming queen is merely a feather in the cap that has been her career at Washburn thus far.

The president of Order of Omega, on PanHellenic Council and ZTA, Willis has spent time volunteering with the Topeka Rescue Mission, Newton-Salem United Methodist Church Harvesters and Race Against Breast Cancer. She also serves as the co-anchor for KSWU News, Washburn’s student-produced online news show, which broadcasts live from the basement of Henderson every Wednesday.

Her experience with KSWU has been the inspiration for life after Washburn as her post-graduation goal is to become a TV news anchor. Willis is also considering continuing her education to earn a master’s degree.

A senior math education major, Crume is a member of Sigma Phi Epsilon and, during his time there, has served as president, vice-president of recruitment and finance and president of Interfraternity Council. He currently serves as special events director of WSGA and is an active member and vice-president of Washburn’s Rugby Club.

Like Willis, Crume is involved with a number of community service projects, including Big Brothers Big Sisters, Race Against Breast Cancer, Festival of Trees, The Big Event, Let’s Help and Project Doorstep.

After graduation, Crume plans to find work as a middle or high school math teacher and coach basketball and football. He played both sports during his time at Seamen High School.

While honored to be chosen as homecoming king, sharing the crown with Willis was an added bonus.

“It’s pretty cool,” said Crume about being paired with Willis. “She and I are good friends and have been since our freshman year.”

Being part of a close-knit campus community has made Crume’s time at Washburn something he’ll cherish forever.

“You make friends for life here,” said Crume. “It feels like everyone here is close and nobody feels like they’re above anyone else.”

Willis, when discussing what she loves most about Washburn, gave a much more simple answer, one that she believes earned her enough votes to win the crown.