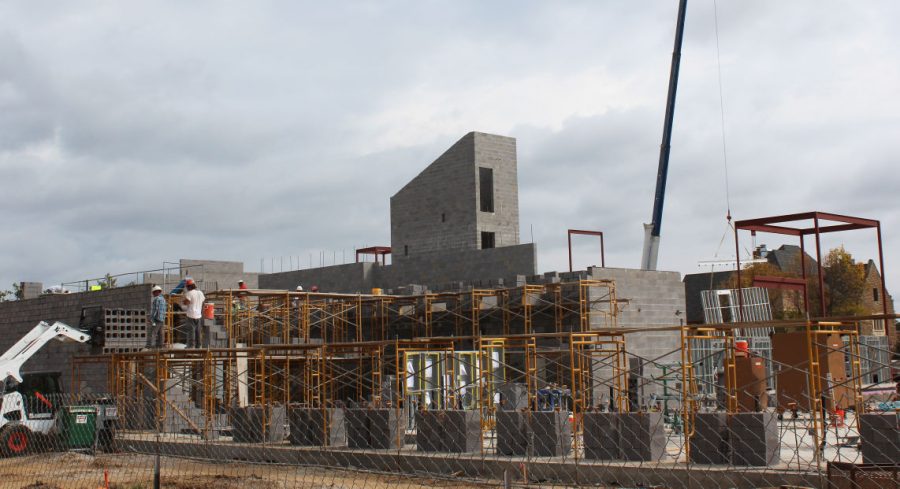 An artist’s rendition of the new residence hall currently under construction, now designated as the East Campus housing and dining facility, was released in the staff council meeting minutes from Sept. 8, which also included extensive details about the new building.

The meeting minutes detail that the new residence building will have 350 beds, with three variations of suite layouts: six and four bedroom double suites, and two-bed semi-suites. According to the artist’s rendition, the new suites will also feature their own lounge areas. Like the Living Learning Center, all floors will be co-ed.

The minutes also stated that the new residence building will include a new dining hall dubbed the “All You Care to Eat” dining hall, seating 300 with hours similar to the Memorial Union’s cafeteria. The dining hall will also be managed by Chartwells, who has signed a new 10-year contract with Washburn.

Brad Turnbull, assistant director of Residential Living, revealed during the meeting that Washburn Technical Institute students will be allowed to live on campus now, so long as the residents have at least 12 credit hours total per semester with at least six credit hours on the main university campus.

The new East Campus housing and dining facility is part of the Washburn University Campus Master Plan, specifically in its “1-5 Years” section, alongside the renovated Morgan Hall and the new Kansas Bureau of Investigation building. Also planned out in this section is a new indoor practice facility and tree planting on the lawn by the Memorial Union.

Those interested in viewing the artist’s renditions and plans for the new residence hall and cafeteria may view them in our online gallery at www.washburnreview.org.