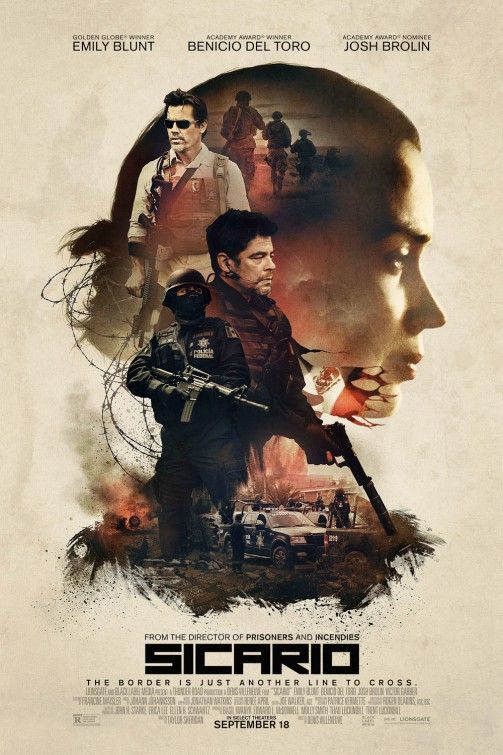 Denis Villeneuve has already established that he is a brilliant filmmaker with an eye for suspense and style. Other films helmed by Villeneuve include “Enemy,” a thought-provoking and eerie thriller about secrecy and infidelity, and “Prisoners,” a suspenseful film that asks what actions are too extreme in times of crisis. “Sicario,” his most recent film, is a tour de force that not only asks deep philosophical questions, but exudes style and visual beauty.

Kate Mercer (Emily Blunt) is a talented FBI agent in charge of handling hostage situations. Her team discovers mysterious contents in a house that can be traced to a drug cartel in Juarez, Mexico. She is then asked to continue the investigation outside of the FBI by joining an elite team led by Matt Graver (Josh Brolin), who is accompanied by a mysterious man named Alejandro (Benicio del Toro), whose motives and jurisdiction are questionable. Mercer constantly battles with the men who ignore her talents, and if the actions she is participating in are not only within the law, but if they are just as wrong as what the men they are hunting do.

The best kind of suspense is the type that doesn’t pay off the way you think it will. Each exciting moment in this film peaks with a twist you don’t see coming. This not only allows the film to have a constant sense of momentum, but also adds to the dread that casts a pall over the events of the film. Several sequences of the film left me holding my breath and leaning forward in excitement, eager to see what would happen next. The film’s deviation from expectations was refreshing and enjoyable.

The performances also add to the film’s appeal. Josh Brolin adds a sense of humor, his Department of Defense agent is suspiciously relaxed in scenes of intense action, and his wisecracks are delivered with as much gusto as his moments of command. Despite being the protagonist, Emily Blunt is too often sidelined, but she gives a terrific fish out of water performance. The most stunning performance comes from Benicio del Toro, though, as the calm, calculated and domineering Alejandro. He not only shines in a role devoted to scenes of intense action, but is convincing as a presence to be feared. The uneasiness of the film’s environment rests on his ability to be both unsettling and captivating.

The meticulous care of the film should also be praised, each frame feels important, and each character’s decision is weighted in their growth throughout this captivating story. The sweeping shots of the border between the United States and Mexican are beautiful depictions of such a barren landscape. The score from Johan Johansson is not music I would claim to be beautiful, but it is intense and haunting.

Villeneuve’s films are always full of emotionally jarring and thought-provoking themes. His movies leave the audience with a powerful question to ask themselves, and “Sicario” is no different. This film prominently highlights the fight against a violent drug ring, but with the operation teetering on the brink of being illegal. Is it fair to fight illegal, violent actions with equally violent and illegal actions? Is it possible for there to ever be a fight between pure good and pure evil? “Sicario” is Spanish for “hitman,” and the biggest statement of the film is this: Are the hitmen the drug peddling “bad guys,” or are our protagonists the hitmen? After all, they’re both killing people at the behest of a higher power. The final note of this film is a brilliant combination of confusion, bleakness and morality. What’s the point of fighting if after you’re finished the cycle begins again?